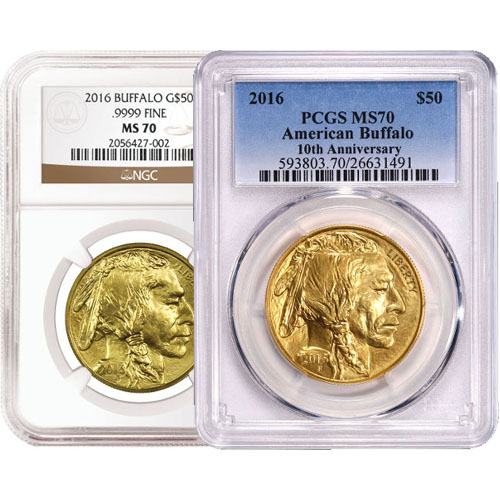 As low as $356.99 per oz over spot!
Add to WishlistLog In to add this product to your Wishlist
Free Shipping on $199+ Orders

Each of the 1 oz American Gold Buffalo Coins in this listing are available in perfect condition as graded by either the PCGS or NGC. Coins with a Mint State 70 grade exhibit full, original mint luster and lack any sign of detracting flaws.

In this product listing you have the chance to purchase an American Gold Buffalo in perfect condition from random years of issue, with random labels in the slab. The American Gold Buffalo bullion coin has been issued every year since 2006. The possible labels include Early Release or First Strike, which indicate coins received for certification within 30 days of the release date for their respective year.

JM Bullion cannot guarantee the exact year of issue or label you’ll receive with your purchase. The exact coin you receive is dependent upon availability in our warehouse when your order is received and prepared for shipment.

On the obverse of all 1 oz American Gold Buffalo coins you’ll find the right-profile effigy of a Native American chieftain. Created in 1913 by James Earle Fraser, this image originally appeared on the Buffalo Nickel. For the Gold Buffalo, engravings of “Liberty” and the year of issue feature on this side.

The reverse of all American Gold Buffalo coins feature the depiction of an American bison. In this case, the design is based upon Black Diamond. The latter buffalo was a resident of the Central Park Zoo in New York City during the early decades of the 20th century. This also appeared on Fraser’s Buffalo Nickel, which was in circulation from 1913 to 1938.

If you have any questions, please don’t hesitate to ask. JM Bullion customer service associates are available at 800-276-6508, online using our live web chat, and via our email address.