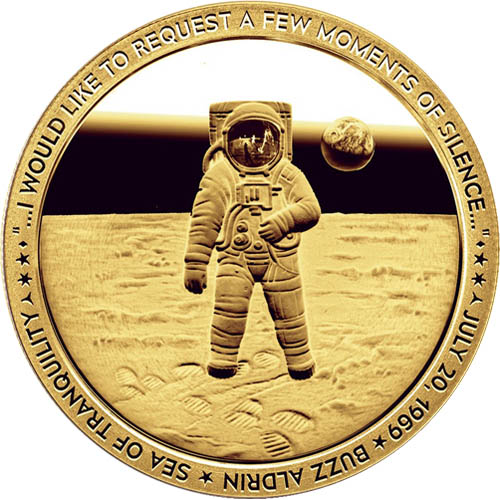 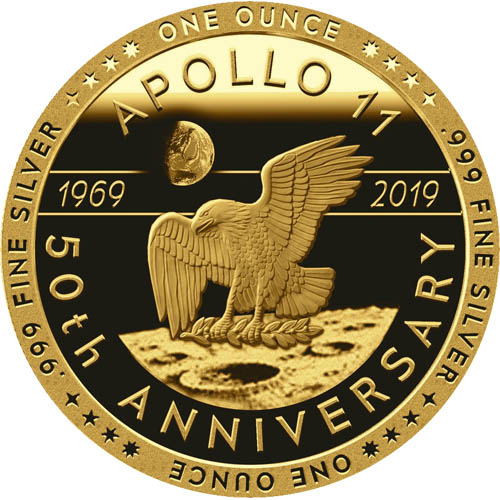 The silver rounds for sale in the Apollo 11 Series from the North American Mint debuted in 2019. The eight-design series offered unique obverse designs on each release following the Apollo 11 mission from liftoff to landing on the Moon to splashdown back on Earth. The fifth round from the initial series was the Moment of Silence creation. Now, 1 oz Apollo 11 Moment of Silence Silver Rounds with a gold-plated finish are available to you for purchase online from JM Bullion.

Apollo 11 was the culmination of a decade of triumphs and failures as the United States aggressively sought to win the Space Race against the Soviet Union. After taking a sucker punch in the gut with the Soviets successful launch of Sputnik, President John F. Kennedy challenged the nation to put all its resources and innovation into sending a man to the Moon before the end of the 1960s and bringing him back home safely.

In the end, the Apollo 11 mission would send a three-man crew into space with the express goal of landing on the Moon. From this three-man crew, Buzz Aldrin and Neil Armstrong spent some 21.5 hours on the surface of the Moon before lifting back off from the Lunar surface to return home to Earth. All three astronauts would splash down in the South Pacific, safely returning home and fulfilling President Kennedys challenge several years after it was issued.

Obverse imagery on the Apollo 11 Moment of Silence Silver Rounds depicts astronaut Buzz Aldrin. He is shown standing alone on the Sea of Tranquility with planet Earth visible in the distant background. In the visor of Aldrins helmet, you can see his shadow, Neil Armstrongs figure, and the Eagle lunar lander.

Reverse designs on the 1 oz Moment of Silence Silver Rounds include the Apollo 11 mission patch. The patch from NASA depicted an American bald eagle landing on the Moon with an olive branch in its talons.

These 1 oz Apollo 11 Moment of Silence Silver Rounds are available with a stunning 24-karat gold layer. This layer is not applied to just select design elements or one side of the round, but rather, is applied to the entirety of both the obverse and reverse fields of the rounds. Each one comes with a Certificate of Authenticity and is housed in a plastic capsule.

Jesus from - May 28, 2021
"The reverse of this round is gorgeous and bought because of my love of history of space. Once again great buy and experience from JM."