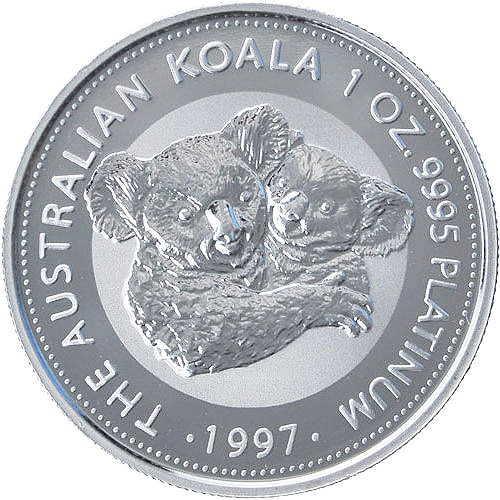 Any quantity available for $145.00 per oz over spot!
Add to WishlistLog In to add this product to your Wishlist
Free Shipping on $199+ Orders

Many investors sometimes overlook platinum coin programs when buying online, mostly because these coins have low mintage figures and lack the visibility of major issues such as the American Silver Eagle or Canadian Gold Maple Leaf. However, that doesn’t detract from the history of some of these programs, such as the Australian Platinum Koala. The 1 oz Australian Platinum Koala Coin is available to you today online from JM Bullion.

On the reverse of all 1 oz Australian Platinum Koala coin you’ll find the image of a koala. These marsupials are a unique symbol of Australia not found outside the continent in the wild. The designs on this face change annually like other Perth Mint programs, and popular designers include artists and engravers James Brown, Raphael Maklouf, Miranda Cornell, and Darryl Bellotti.

The obverse of Australian Platinum Koala coins features one of two designs of Queen Elizabeth II’s portrait. Coins dated from 1988 to 1997 will feature the third-generation depiction of the Queen, created in 1984 by Raphael Maklouf. Those coins dated 1998-present feature the fourth-generation right-profile portrait of the Queen done by Ian Rank-Broadley in 1998.

In this listing, JM Bullion offers you the opportunity to purchase a 1 oz Australian Platinum Koala Coin from a random year of issue. The issue date of your coin, and as such the designs on the obverse and reverse, are determined by availability in our warehouse when your order is processed for shipment.

We encourage all JM Bullion customers to contact us with questions regarding these coins. You can reach out to our customer service team on the phone at 800-276-6508, connect with us online through our live chat, or simply send us an email with your inquiries.