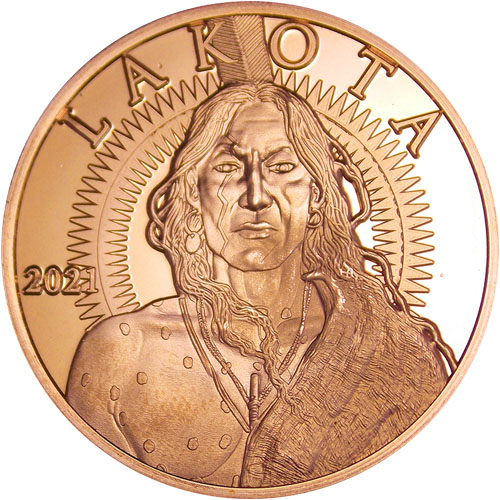 Crazy Horse was born around 1840 in the Lakota tribe of Sioux people. He eventually rose to become the leader of the Oglala band and led his people in a pushback against the encroachment of white American settlers on the land and territory of indigenous people. Feeling the traditional way of life of his people was under threat, Crazy Horse led his people in an armed uprising against the United States federal government.

Starting in the 1860s during the Black Hills War, Crazy Horse guided his Oglala band and other Lakota tribes against the United States Army. He was famous for his participation in several battles during the Black Hills War, such as the Fetterman Fight in 1866. He was eventually captured by US troops under the leadership of General George Cook. On September 5, 1877, he succumbed to a fatal wound suffered at the hands of US Army guards.

The obverse side of 1 oz Lakota Crazy Horse Copper Rounds features a portrait of the famous tribal leader. Crazy Horses greatest military accomplishment in the wars on the Great Plains between indigenous tribes and the US Army came at the Battle of the Little Bighorn when the Lakota and several allied tribes routed the US Cavalry under the command of Lieutenant Colonel George A. Custer.

These 1 oz Lakota Crazy Horse Copper Rounds are available to you for purchase brand-new from the mint. Each one is available with a plastic flip or a tube of 20 copper rounds.

JM Bullion customer service is available to you at 800-276-6508. Alternatively, you can connect with us online using our live chat and email address features.