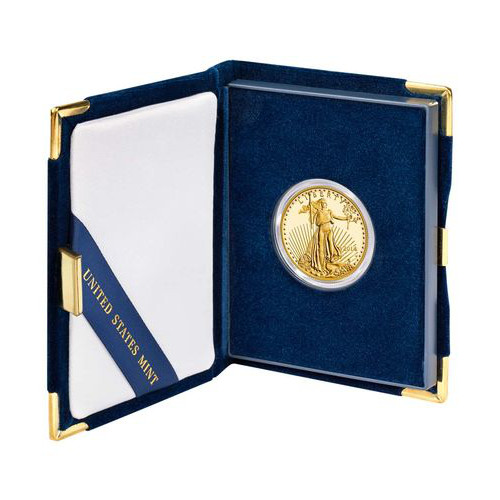 As low as $890.00 per oz over spot!
Add to WishlistLog In to add this product to your Wishlist
Free Shipping on $199+ Orders

America’s Gold Eagle program was launched in 1986, the same year as its counterpart, the American Silver Eagle. Although the bullion coin was struck in all four weights (1 oz, ½ oz, ¼ oz, and 1/10 oz) in 1986, the 1 oz Proof American Gold Eagle was the only weight struck in the proof mintage that year. That makes the 1 oz coin the longest-running mintage in the proof series. The ½ oz proof coin was added in 1987, with the ¼ oz and 1/10 oz coins added in 1988.

On the obverse side of the American Gold Eagle is a modern reproduction of Augustus Saint-Gaudens’ Gold Double Eagle design. The reverse side features Miley Busiek’s depiction of a family of bald eagles, with a male returning to the female and hatchlings in the nest.

If you have questions about the American Gold Eagle available here today, contact JM Bullion staff at 800-276-6508. Coins ordered today will be filled based upon availability at shipping, meaning the year of minting will vary.