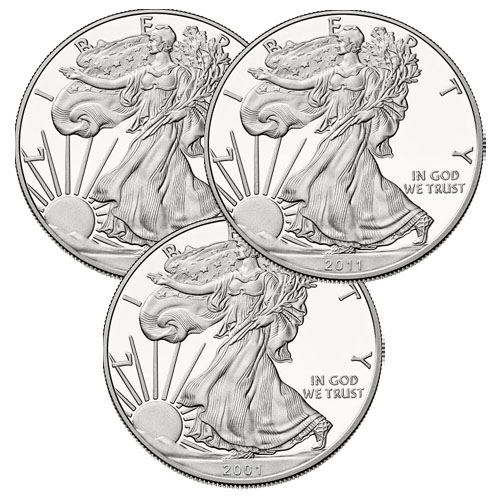 Proof American Silver Eagle coins were introduced in 1986 alongside the bullion version. The two coins have had much different paths since that day. Like most proof coin programs, the Proof Silver Eagle experienced its greatest mintage year in the very first year of offering. However, there have been significant dates of mintage since that time.

Following the production of 1.4 million coins in 1986, the other top-five production years are 2006, 2011, 2014, and 2013. For the first two of those, 2006 and 2011, increased mintage of proof coins coincided with the 20th and 25th anniversary releases, respectively. The latter two years included Limited Edition Silver Proof Sets from the US Mint that featured Proof Silver Eagles.

On the obverse of all 1 oz Proof American Silver Eagle Coins you’ll find the image of Walking Liberty. This iconic design captures Liberty as she strides toward the setting sun, with the American flag draped over her shoulders and her right arm outstretched toward the horizon. Created by Adolph A. Weinman in 1916 for the half-dollar coin, it represents America’s drive toward a brighter future.

The reverse of the Proof American Silver Eagle includes the image of the heraldic eagle of the United States. This design features the national heraldic shield on the chest of the American bald eagle. The bird’s wings are outstretched to either side, with 13 stars above its head to represent the original colonies and its claws holding an arrows on one side, and the olive branch of peace on the other.

In this product listing, JM Bullion offers you the chance to purchase a 1 oz Proof American Silver Eagle from a random year of issue. We guarantee your coin will arrive in a protective plastic capsule, but cannot guarantee a specific year of issue. Your coin will be dated 1986 to 2008 or 2010-present, as no coins were struck in proof in 2009.

We encourage JM Bullion customers to call us at 800-276-6508 with questions. You can also chat with us live online or email your inquiries directly to our customer service team.