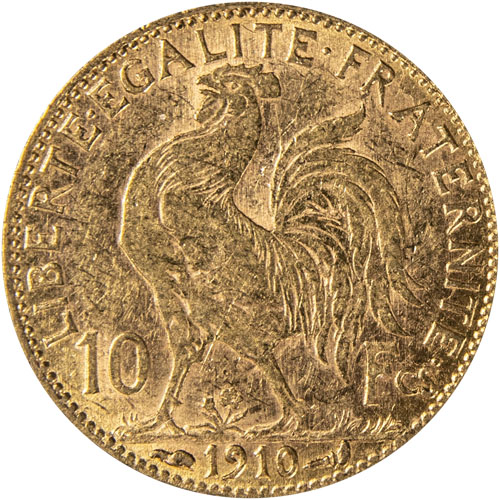 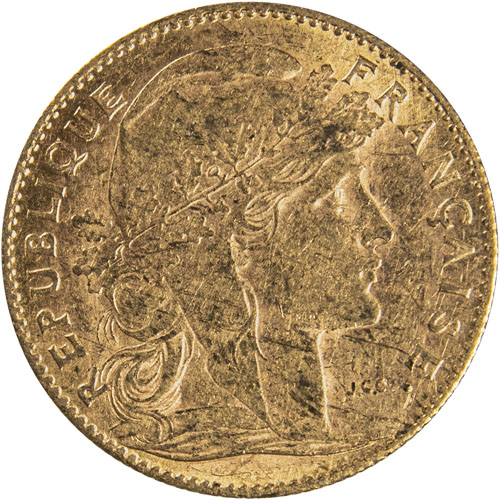 One of the most beautiful French coin designs of the last two-plus centuries is the Marianne-Rooster design from the denominations of the French Franc. The 10 Franc Gold Coin with these visuals was introduced in 1899 and produced only up until the eve of World War I’s outbreak in Europe. Now, 10 Francs France Gold Coins with the Rooster design are available to you for purchase online from JM Bullion.

The 10 Franc Gold Coin featuring the Marianne-Rooster design combination was one of the shortest-lived designs in the history of the Gold Francs. The artwork shown here was created by Jules-Clement Chaplain and featured the female allegory known as Marianne on the obverse, with the Gallic Rooster on the reverse.

These coins were designed for the Paris Mint during the era of the Third Republic, a period in French history that stretched from the downfall of the Second French Empire and Emperor Napoleon III in 1970 until the fall of Paris at the hands of Nazi Germany early in World War II.

In the obverse design of 10 Francs Gold Coins, the effigy of Marianne features in right-profile relief. This beautiful effigy of the French female personification includes a Phrygian cap and a laurel wreath on her head.

For the reverse design element of 10 Francs France Gold Coins, the famous Gallic Rooster is shown in the design field. The rooster is shown in an upright position, head held high as it fluffs out its tail feathers. Both fields of the coin include inscriptions in French, with the date and face value on this reverse field of the coins.

These 10 Francs France Gold Coins are available to you with protective plastic flips for delivery. Each one is an Almost Uncirculated specimen. This term refers to coins that have medium to near-full luster with only extremely light or trace signs of friction and wear. These minimal signs of friction and wear are present only on the highest relief points of the coin.

Please remember that JM Bullion selects all coins in this listing at random once your payment clears. We cannot guarantee a specific date in advance, and would like you to note that you may receive coins with matching dates if you buy more than one.

JM Bullion customer service is available at 800-276-6508 to answer any questions when you buy gold. Additionally, you can chat with us live online or simply send us an email.