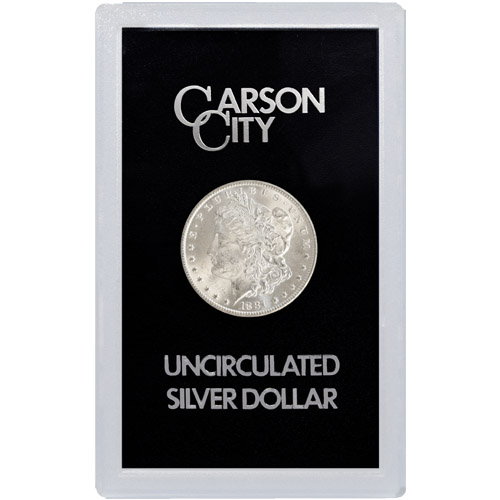 The Morgan Silver Dollar was introduced in 1878 by the United States Mint. In its first year in production, the coin was struck at the Philadelphia Mint, Carson City Mint, and San Francisco Mint. By 1879, the New Orleans Mint had joined the rotation in striking the coins for circulation use. These four mints continued striking the coins through 1885. The 1881 release was the second-lowest by the Carson City Mint and more than half of the coins it struck never saw circulation. Right now, 1881-CC Morgan Silver Dollar Coins in GSA packaging are available to purchase online from JM Bullion.

Each of the 1881-CC Morgan Silver Dollar Coins available here comes with its original GSA packaging. When the US Treasury discovered millions of Morgan Silver Dollars in its vaults in the 1960s, the Government Services Administration conducted an audit of the coins to determine how many coins were available, which mint issued them, and which date marks were available. Prior to auctions in the 1970s and 1980s, the GSA packaged the coins in hard plastic holders. The coins were also originally offered in presentation boxes with a Certificate of Authenticity, but many of those items were discarded by buyers who wanted to get their Morgans graded.

When the GSA conducted its audit of the hoard of Morgan Silver Dollars found in the 1960s, it was determined that 95% of the total collection consisted of rare date marks from the Carson City Mint. Most of the coins had been struck by the Carson City Mint and sent directly to US Treasury vaults. This means the coins were never issued into circulation and remain uncirculated. Among the most impressive findings of the audit, the GSA found that from the near-record-low in 1881 of just 296,000 coins from Carson City, a total of 147,500 coins were sitting in US Treasury vaults.

The obverse side of 1881-CC Morgan Silver Dollars includes a bust of Lady Liberty. This left-profile portrait includes a coronet and wreath crown in Liberty’s hair, with much of her hair held up in a cap at the back of her head and strands of curly hair hanging down the side of her neck.

On the reverse field of 1881 Morgan Silver Dollar Coins is an image of the heraldic eagle of the United States. The coins come with a front-facing bald eagle clutching the arrows of war and the olive branch of peace in its talons.

If you have questions, JM Bullion has answers. Our team is available at 800-276-6508, online using our live chat, and via our email address.