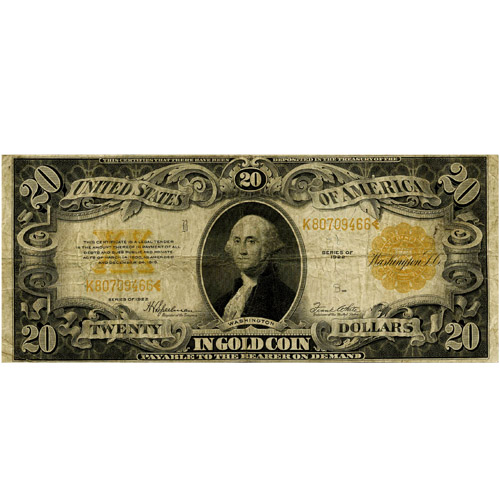 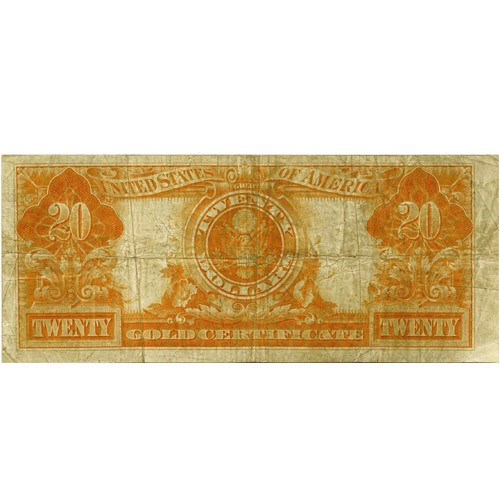 Gold Certificates were not printed as payable to the bearer until the Series of 1882, nearly two decades after the first Gold Certificates were produced. All subsequent releases of the Gold Certificate were marked as payable to the bearer, with three exceptions: 1888, 1900, and 1934. The 1900 Series included only a new $10,000 note design that was canceled and never released. While some samples remain, none were ever legal tender. The 1934 Series was not legal tender as the notes were produced, though not released, after the end of the gold standard in 1933.

On the reverse of 1906-1922 $20 Gold Certificates is an image of the heraldic eagle of the United States with the denomination noted.

These 1906-1922 $20 Gold Certificates are available in Fine+ condition. Paper notes in this condition have rounded corners, margin splits, and mild soiling possible, along with fold lines. Each note has its own protective plastic sleeve. Please note that these $20 Gold Certificates are possible from the 1906 Series and 1922 Series. The designs are the same on each, with the 1922 Series featuring a notation on the obverse that the notes are legal tender payable to the bearer. These notes have yellow-gold ink on the Roman numeral XX, serial numbers, and Treasury seal on the obverse.

JM Bullion customer service is available at 800-276-6508. You can also chat with us live online or send us an email.