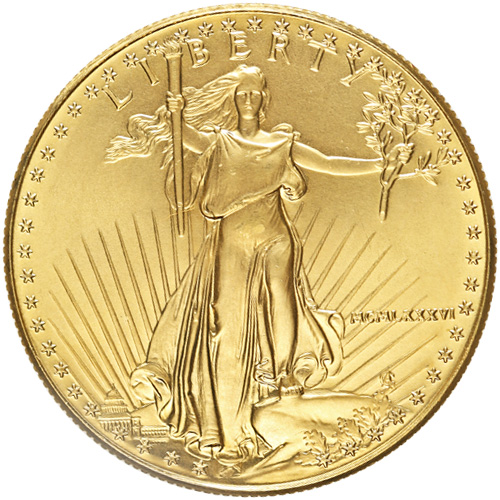 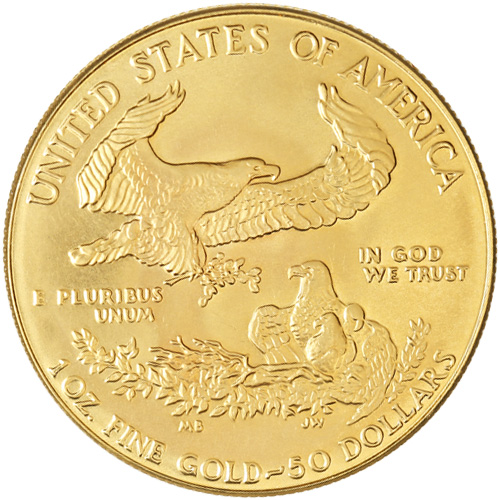 The first year of issue for the American Eagle series of gold and silver bullion coins from the United States Mint was 1986. For the first time in more than 130 years, the US Mint was striking gold coins with a purity above .900. The 1986 1 oz American Gold Eagle Coin is available to purchase today from JM Bullion.

The American bald eagle is the official national emblem of the United States, and was chosen by the Founding Fathers in 1792 to fill that role. Today, it is widely regarded as the symbol of America and was originally chosen for its longevity, majesty, and power.

On the reverse of all 1986 1 oz American Gold Eagle coins you’ll find the design of a family of bald eagles at their nest. Created in 1986 specifically for the American Gold Eagle by Miley Busiek, this depiction includes a male bald eagle returning to the nest with an olive branch while the female closely guards the young hatchlings.

Augustus Saint-Gaudens created what has become known as the greatest American coin design ever. In 1907 he completed his image of Liberty as a beautiful woman with free-flowing hair striding forth from the national capital of Washington DC. It appeared on the $20 Gold Double Eagle from 1907 to 1933.

The obverse of all 1986 1 oz American Gold Eagle coins features a modified version of Saint-Gaudens’ original Liberty image. Changes made to the coin for this release include addition of two stars around Liberty’s figure to represent the additions of Hawaii and Alaska into the Union following World War II.

Each 1986 1 oz American Gold Eagle coin available here today is in BU condition. Coins in BU condition show no signs of wear and tear, though you may notice minor flaws such as breaks in the luster, spotted surfaces, or contact marks from the coining process.

American Gold Eagle coins are produced by the United States Mint annually. The coins are now available in bullion, proof, and burnished versions, but the 1986 American Gold Eagles were only available as bullion and proof specimens, with only the bullion version consisting of a 1 oz and its three popular fractional-weight options.

We encourage all JM Bullion shoppers to reach out to us with questions. You can contact our associates at 800-276-6508, chat with us live online, or simply send us an email.