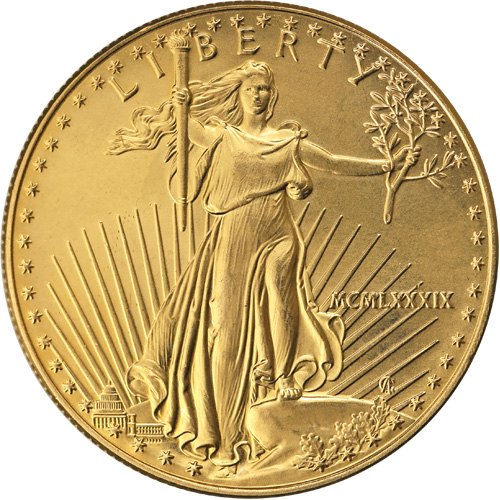 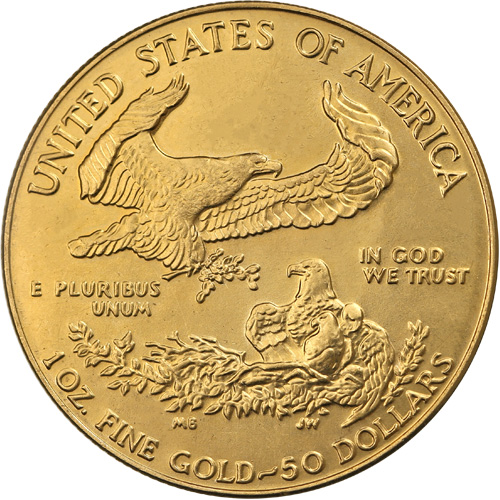 American Gold Eagle coins are the official gold bullion coin of the United States of America, and are part of the larger American Eagle series of bullion coins that includes a silver and platinum variant. The Gold Eagle is the most diverse, offering three versions and four total weights. Today, the 1989 1 oz American Gold Eagle Coin is available to you online from JM Bullion.

American Gold Eagle coins were introduced in the US in 1986 as bullion and proof coins. While the bullion coins were originally available in all four prescribed weights of 1 oz, ½ oz, ¼ oz, and 1/10 oz, the proof program featured only the 1 oz coin with fractionals introduced in the following two years.

While the 1 oz American Gold Eagle was dropping, some of the overall dip in production across the series was picked up by increasing demand for the ¼ oz and 1/10 oz bullion versions, which actually saw increases in 1989 from 1988 of 32,000 coins and 105,000 coins respectively.

On the obverse of the 1989 1 oz American Gold Eagle is Augustus Saint-Gaudens’ iconic image of Lady Liberty. She is depicted in his design with free-flowing hair and a brilliant robe covering her figure as she walks forth from the nation’s capital holding her torch aloft as a guiding light for the country.

All 1989 1 oz American Gold Eagle coins in this listing are in BU Condition. Coins in BU condition show no signs of wear and tear, though you may notice a range of minor flaws such as breaks in the luster, spotted surfaces, and contact marks from the striking of blanks during the production process.

Please direct your questions to JM Bullion’s customer service team at 800-276-6508. You can also connect with us online through our live chat and email features.