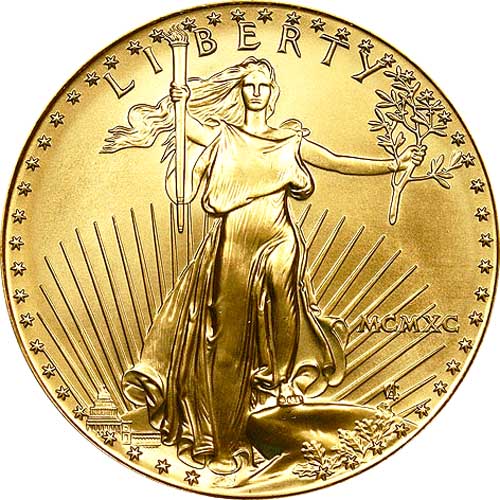 The American Gold Eagle coin collection saw significant dips in demand as the 1990s opened, with the demand for 1 oz coins in the series falling in consecutive years from 1988 to 1992, despite gains in production for the lighter fractional-weight options. The 1990 1 oz American Gold Eagle Coin is available for purchase today from JM Bullion.

American Gold Eagle coins entered the 1990s struggling to cope with a stronger American economy. As the recession of the late 1980s wore away, consumer confidence soared and the American stock market improved. A stronger US Dollar always means weaker demand for gold and silver.

After debuting with 1.362 million coins in 1986, the 1990 1 oz American Gold Eagle had sunk almost exactly 1 million coins in production. Unlike the late 1980s when the fractional weight coins gained minting to offset some of the losses, all four weights in the bullion issue saw lower mintage figures for 1990 after strong performances from the oz and 1/10 oz coin in recent years.

The 1990 1 oz American Gold Eagle Coins available to you here today are in BU condition. Coins in BU condition have no wear and tear on their surfaces, however, you might notice minor flaws ranging from breaks in the luster and spotted surfaces to contact marks from the production process at the mint.

The reverse of the 1990 1 oz American Gold Eagle coin includes the image of a family of nesting bald eagles. A female eagle watches carefully over the nest full of hatchlings, while a male eagle is shown flying overhead.

All American Gold Eagle coins are produced by the United States Mint, with current production taking place entirely at the West Point Mint facility in the state of New York.

We encourage all JM Bullion shoppers to contact us with questions. Our customer service team is available at 800-276-6508, online using our live web chat feature, or by sending us an email with your inquiries.