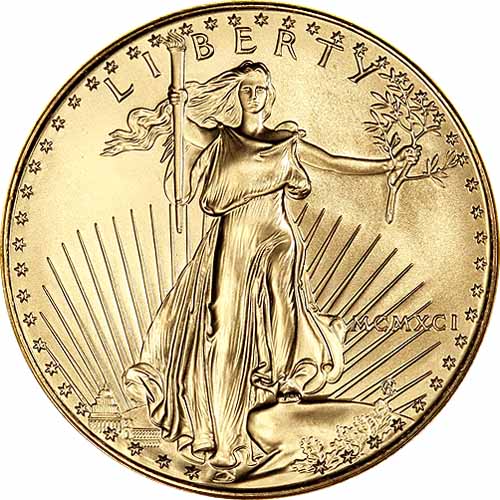 Only one other point in time during the history of American Gold Eagle production would mintage figures drop lower than they did in the early 1990s. With an improving economy, a strong US Dollar, and low gold prices, few investors flocked to gold bullion coins. Right now, the 1991 1 oz American Gold Eagle Coin is available to you from JM Bullion.

The primary American Gold Eagle design found on the obverse of all coins in the collection comes from American history and is widely regarded as the finest design ever featured on the nation’s circulation currency.

President Theodore Roosevelt sought changes in the design of American coins, bringing the designs into the 20th century, reflecting America’s growing influence in the world, and presenting designs that were distinctly American.

Saint-Gaudens’ design appears on the obverse of the 1991 1 oz American Gold Eagle Coin. It features a depiction of Lady Liberty in her full-length figure with a torch held high in her right hand to light the way and the olive branch of peace included on her left hand.

The 1991 1 oz American Gold Eagle coins had an exceptionally low mintage figure. Only the 1994 through 1996 strikings of the coin had lower mintage figures in the now-30 year history of the coin program. With just 243,100 coins struck, production had dropped more than one million coins from the introduction in 1986.

Each 1991 1 oz American Gold Eagle coin in this release is in BU condition. Coins in this condition exhibit no signs of wear and tear on the surfaces, but may feature minor flaws ranging from breaks in the luster and spotted surfaces to contact marks from the coining process.

If you have any questions, please don’t hesitate to ask. JM Bullion customer service is available on the phone at 800-276-6508, online through our live web chat feature, and via our email address.