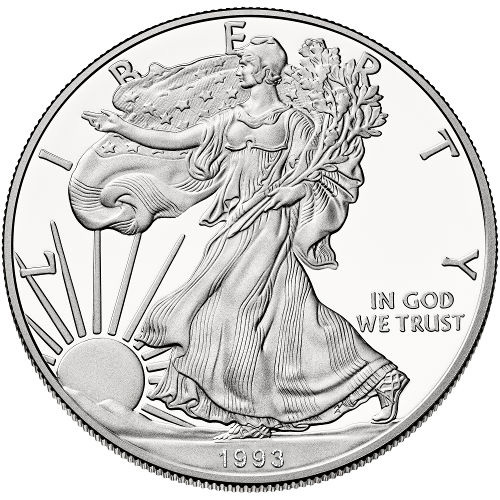 The American Silver Eagle coin program experienced a year of unification in 1993. After seven years of striking the proof and bullion versions of the coin at the same mint, proof production was moved to a different location in the United States Mint system. Today, the 1993-P Proof American Silver Eagle coin is available courtesy of JM Bullion with a commemorative display box and CoA.

When the very first American Silver Eagles were struck in 1986, Secretary of the Treasury James A Baker III commented that he “didn’t need a pick and shovel to start the San Francisco Silver Rush of 1986.” From 1986 until 1992, all American Silver Eagle coins (bullion and proof) were produced at that same facility.

In 1993, the United States Mint shifted production of the proof coins to the Philadelphia Mint, separating the proof production from that of the bullion coins for the first time. This shift just happened to coincide with the 200th anniversary of the Philadelphia Mint, which struck the first-ever American coins for the new United States Mint in 1793.

Lastly, 1993 marked a third consecutive year of declining production of Proof American Silver Eagle coins. With just 405,913 coins struck this year, production had been cut almost in half since 1990. In fact, 1993 marks the second lowest proof mintage year of all time in the series.

On the obverse is the beautiful image of Walking Liberty. Featuring Lady Liberty with the American flag around her shoulders, Adolph A. Weinman’s depiction shows Liberty walking toward the setting sun as a symbol of the nation’s desire to seek out a brighter future.

The reverse features the heraldic eagle design from John Mercanti. Hired as the Chief Engraver of the US Mint in 1986, this was his first major design for the mint. Mercanti remained in his post until retirement in 2010.

If you have questions, please don’t hesitate to ask. JM Bullion associates are available on the phone at 800-276-6508, online using our live chat, and via email.