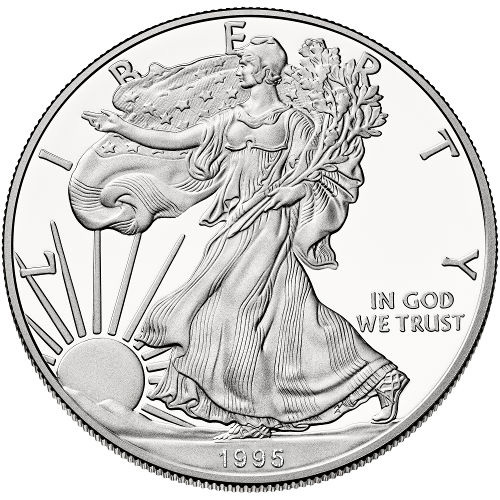 The United States Mint typically celebrates milestone anniversaries for the American Eagle based upon the date the coin was released, not the number of times the coin was produced. For example, the 20th anniversary celebration came in 2006, twenty years after the 1986 introduction of the coin. Likewise, the 25th anniversary was in 2011, and the 30th anniversary is in 2016.

For the 10th anniversary, the United States Mint celebrated the 10th release of the coin in 1995. The standard bullion and proof coins were produced at the Philadelphia Mint, with 438,511 coins struck in the proof version. This figure was up from recent years, and was bolstered by the striking of an additional West Point Mint proof.

On the obverse of every American Silver Eagle coin is the image of Walking Liberty created by Adolph A. Weinman in 1916. It featured a full-length figure of Liberty walking toward the setting sun, with the American flag draped across her shoulders. It was used on the Walking Liberty Half Dollar coin from 1916 to 1947.

The reverse features the coin’s weight, purity, metal content, and face value engravings surrounding the heraldic eagle of the United States. This design comes from John Mercanti, and has featured on American coins since the 18th century. Mercanti’s version is a modernized depiction of the heraldic eagle.

Please contact JM Bullion with any questions. You can reach us at 800-276-6508, online using our live chat, or via email.