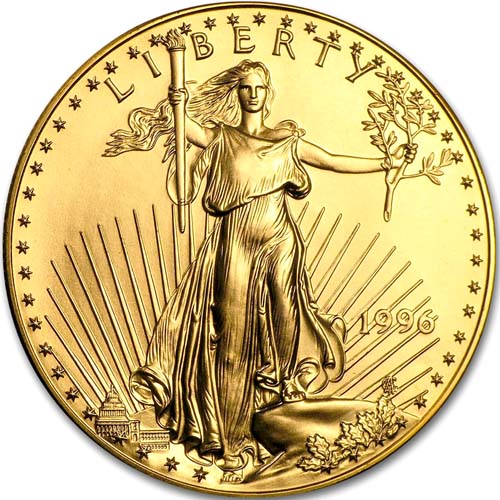 The 1996 1 oz American Gold Eagle coin marked a major changing point in the bullion series from the US Mint. From its introduction in 1986, the coins in this collection had seen dropping demand, but also a change in which coin was the most popular among investors.

When the American Gold Eagle debuted, the 1 oz coin was the most popular of the four available weights. Fast forward a decade, and there was a new popular coin in the collection. While the 1996 1 oz American Gold Eagle had hit the lowest demand it has seen to date in its history, the 1/10 oz coin actually increased in 1996 by nearly double, and would remain equal to or ahead of the 1 oz in terms of demand.

On the obverse of all 1996 1 oz American Gold Eagle Coins you’ll find the image of Liberty, with flowing hair and a flowing robe as she walks forward into an unknown future holding her bright torch as a guiding light. It was created in 1907 by Augustus Saint-Gaudens, and featured on the $20 Gold Double Eagle coin until 1933.

The reverse of all American Gold Eagle coins includes the design of a family of bald eagles in their nest. Created in 1986 by Miley Busiek, it features the image of a male eagle flying over the family nest, which contains a group of hatchlings that is guarded by a watchful female.

Each 1996 1 oz American Gold Eagle Coin in this product listing from JM Bullion is in BU condition. Coins in BU condition have no signs of wear and tear, but you will notice minor flaws ranging from breaks in the luster and spotted surfaces to contact marks from the production process.

We encourage all JM Bullion associates to contact us on the phone at 800-276-6508. JM Bullion customer service is also available on the web using our live chat feature or our email address.