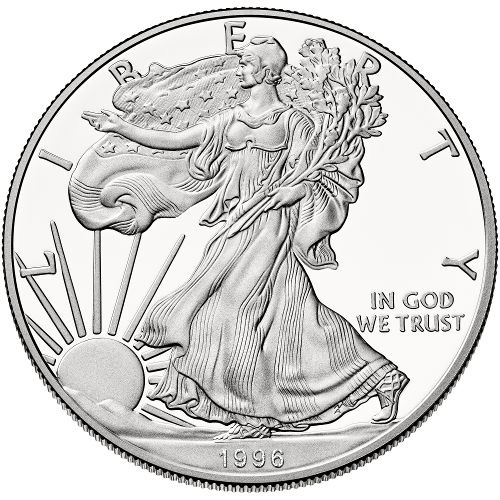 After years of declining demand and production, the American Silver Eagle hit the floor in 1996. This year saw the lowest total mintage in program history, with just 4.1 million coins struck. However, this was one of the only times in program history that the proof version had seen a jump in demand while the bullion coin sank.

In the years to come, the American Silver Eagle would experience continual increases in demand. Production went up every year between 1996 and 2002, and even after leveling out in the early 2000s, production numbers at that time were still double those of the 1990s.

Adolph A. Weinman’s Walking Liberty design graces the obverse of every American Silver Eagle. It was created by Weinman in 1916 for use on the nation’s half-dollar coin, which eventually took on the name Walking Liberty Half Dollar.

Former-Chief Engraver of the United States Mint, John Mercanti, designed the heraldic eagle used on the reverse. This was his first major design as the Chief Engraver, and it utilizes common symbols already in use by governmental agencies.