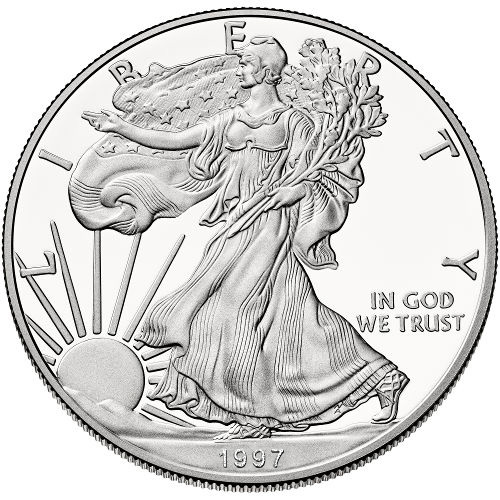 After years of declining demand and production, the American Silver Eagle coin program began to show signs of life in 1997. The coin’s production was up only modestly over 1996, but it was a sign of things to come as demand skyrocketed around the turn of the century. Right now, 1997-P Proof American Silver Eagle coins are available from JM Bullion with a commemorative box.

American Silver Eagle coins were first introduced in 1986 as the nation’s official silver bullion coin. By 1997, the program had already seen one upswing in demand, followed by a few years of decline. Although just 4.7 million coins were struck in 1997 in total, production was up from 1996 and signaling growth in the years to come.

In fact, by the end of the 1990s, production would nearly double from 1997 mintage numbers. Of the 4.7 million coins produced this year, the 435,368 proof strikings represents one of the five lowest mintage numbers in program history.

An emerging trend in 1997 was behind the growth this year, and in the years to come: Y2K. Fear over the impact of the burgeoning dependence on digital technology and the switchover to 2000 created jitters among stock investors, who increasingly turned to precious metals with their money.

After 39 years in the dark, the image of Walking Liberty reappeared as the face of the American Silver Eagle. Featured on the obverse side, Adolph A. Weinman’s 1916 creation is now beloved by a new generation of Americans one century after it first grabbed the attention of Americans on the nation’s half-dollar coin.

Please direct your questions to a JM Bullion associate. You can reach us on the phone at 800-276-6508, online using our live web chat, or via email address.