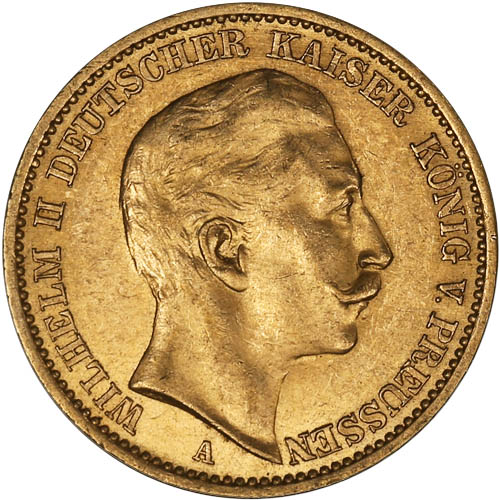 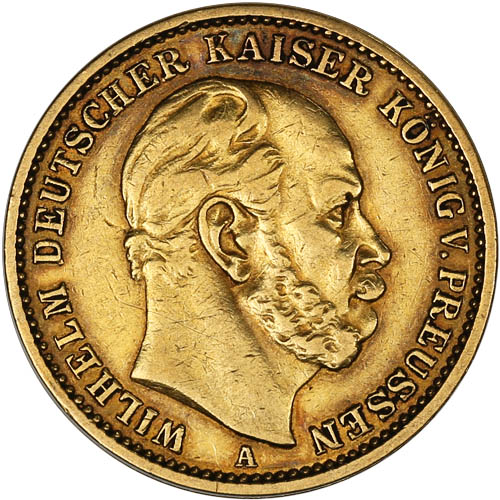 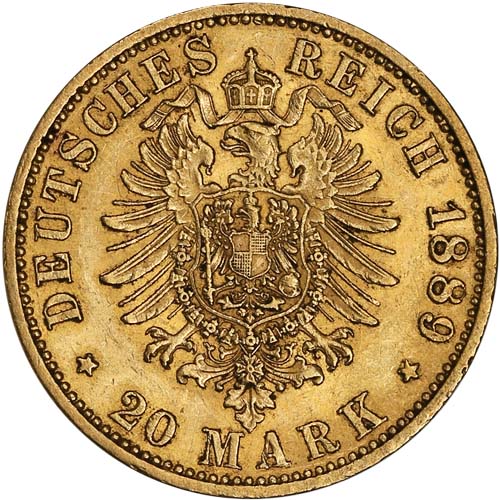 One of the most famous national currencies used in mainland Europe during the 19th and 20th centuries was the German Mark. Used on varying forms of currency from 1871 to 1915, the German Mark was issued as paper money, silver coins, and gold coins. Today 20 Mark Gold Coins from the German Empire are available to you online from JM Bullion.

The German Mark of the German Empire was issued by the Reichsbank as a paper note from 1873 to 1914, as a silver coin through 1919 in smaller denominations, and as gold coins through late 1915. These 20 Mark Gold Coins are historic symbols of the German Empire that flourished on the continent through the end of World War I.

One of the more unique aspects of the 20 Mark Gold Coin is the depiction of three different monarchs on the obverse of the coins during their relatively short coining lifetime. In 1888, the German Empire went through a period known as the Year of Three Emperors. Wilhelm I died as King of Prussia and German Emperor at 90 years old early in the year and was succeeded by his only son Frederick III. However, Frederick III ruled for just 99 days, eventually dying from incurable throat cancer. Wilhelm II then came to power and set the German Empire on a course toward World War I.

The obverse of these 20 Mark Gold Coins is struck with the right-profile portrait of a German monarch, the individual ruling the empire as German Emperor and King of Prussia following the unification of the kingdoms during Wilhelm I’s rule. Coins from 1871 to 1888 feature Wilhelm I, while a limited number of 1888 issues have Frederick III. All coins issued from late 1888 through the end of 1915 feature Wilhelm II.

Engravings on the obverse of the coin are inscribed in German, with the words “Deutscher Kaiser Konig v Preussen” indicating the monarch’s status as German Emperor and King of Prussia. The ruler on the throne at the time has his name inscribed as well.

On the reverse of the 20 Mark coins is the crowned arms of the German Empire. The design features an eagle with wings spread wide, with inscriptions of the nation of issue and the face value of the coin in German Marks. The coins available in this listing are in circulated condition, indicating the presence of typical wear and tear resulting from use in economic transactions.

Please feel free to reach out to JM Bullion with your questions. You can call us at 800-276-6508, chat with us live online, or simply send us an email with your inquiries.

David from - March 16, 2019
"I got my coin within about a week, and it was in very nice condition, probably XF/AU. It will make a nice addition to my collection."