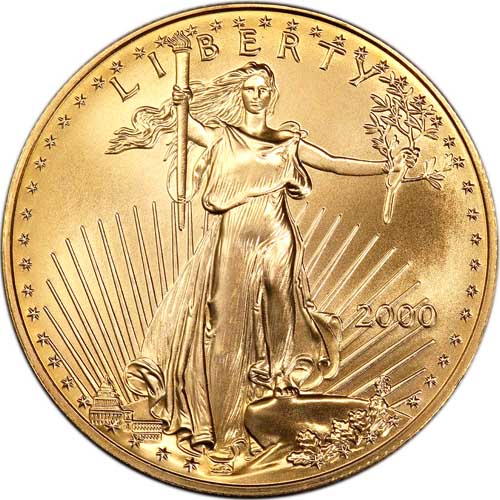 American Gold Eagle coin demand had hit all-time highs in the late 1990s, surging to its highest two-year total ever in 1998 and 1999. In fact, the mintage for 1 oz coins in 1999 was the highest the program has ever seen in its 30-year history. The fractional-weight coins were also gaining popularity at this point in time.

Mintage figures for all of the coins dropped drastically in 2000, with the 2000 1 oz American Gold Eagle shedding over one million coins in its mintage figure, while even more drastic drops in demand occurred for the 1/10 oz coin, which shed over two million coins in production. In fact, despite economic uncertainty, the American Gold Eagle would fall to some of its lowest ever figures within a year.

All 2000 1 oz American Gold Eagle coins offered here today are in BU condition. Coins in BU condition show no signs of wear and tear on the surfaces, but you may notice minor flaws such as breaks in the luster, spotted surfaces, and contact marks from striking of the blanks during the production process.

On the obverse of all American Gold Eagle coins you’ll find the iconic design of Lady Liberty created in 1907 by Augustus Saint-Gaudens. An Irish-American artist and engraver, Saint-Gaudens was chosen by President Theodore Roosevelt personally to help lead the charge to redesign American coinage, creating this beautiful depiction of Liberty as she strides forth from the nation’s capital city.

The reverse of the 2000 1 oz American Gold Eagle Coin includes the design created by Miley Busiek. It features a nesting family of bald eagles, with a female guarding the hatchlings in the nest as the male is depicted flying overhead. This design was created specifically for the American Gold Eagle coin and remains an exclusive to this program.

If you have any questions about American Gold Eagle coins, please don’t hesitate to ask. You can reach out to us on the phone at 800-276-6508, connect with us online through our live web chat, or send us an email with your inquiries.