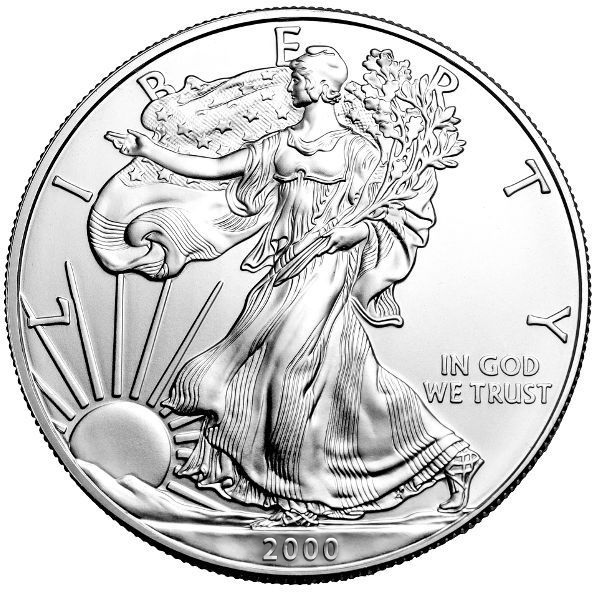 Back in 1996, the American Silver Eagle coin program hit an all-time low in production, with a total of just 4.1 million coins produced. The result was largely impacted by the overall health of the American economy at the time.

Fast forward a few years though, and Y2K fears were dragging down the American economy with the approach of 2000. There was also the Dotcom bubble burst to come on the horizon. These fears pushed precious metal prices higher, and with it, interest in American Silver Eagle coins.

There were 9.2 million 2000 American Silver Eagle bullion coins produced, representing a jump of 1.8 million from 1999. Additionally, the proof version of the coin saw a jump of 50,000 coins from the previous year.

On the obverse, as usual, is the image of Walking Liberty from Adolph A. Weinman. The reverse features the heraldic eagle of the United States from John Mercanti. The 2000 American Silver Eagle, both bullion and proof, was the last struck at the Philadelphia Mint. Proof coins had been at the Philadelphia Mint since 1993, while the bullion was there for just two years in 1999 and 2000.

Please direct your questions to a JM Bullion associate at 800-276-6508, connect with us online using our live web chat, and via our email address.