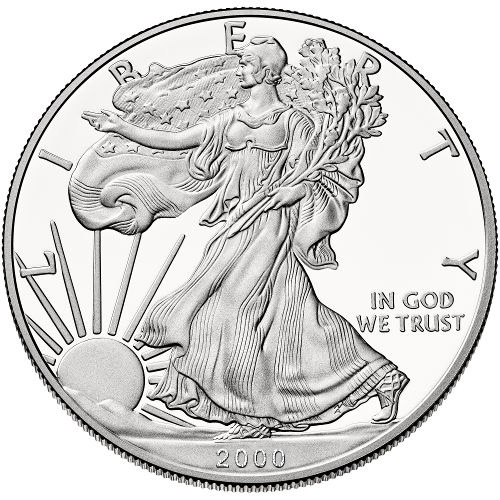 At the height of the concern over Y2K, the American Silver Eagle continued to surge in popularity. Precious metals have long been considered a safe haven for assets during times of turmoil, and the question marks surrounding Y2K were no different. Right now you can purchase a 2000-P Proof American Silver Eagle from JM Bullion complete with a commemorative display box.

With a total of 9.8 million coins produced, the 2000 American Silver Eagle coin had nearly doubled the production of the 1996 coins. Bullion coin mintage was up almost 2 million from one year prior, and the proof coin’s mintage of 600,000 was at its highest level since 1990.

On the obverse is the stunning Walking Liberty design from Adolph A. Weinman. Indicative of the nation’s desire to strive for a brighter future, Liberty is shown walking toward the setting sun draped in the American flag.

The reverse bears the official seal of the United States, known as the heraldic eagle. It has featured on countless coins, but this design is a modernized version from John Mercanti.

If you have any questions, please feel free to reach out to JM Bullion at 800-276-6508. We’re also available online using our live web chat feature or email address.