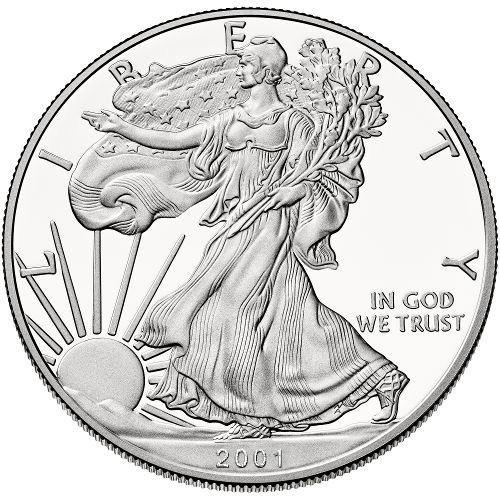 The American Silver Eagle entered the 21st century riding on a high in demand that had never been seen before. America and the world had seen Y2K come and go, but demand for precious metals remained at all-time highs. The 2001 American Silver Eagle had one of the highest mintage levels to date in program history, but it was merely the start of something larger in the years to come. Right now, the 2001-W Proof American Silver Eagle coin is available for purchase from JM Bullion.

After seven years of production at the San Francisco Mint and eight years at the Philadelphia Mint, striking of the Proof American Silver Eagle coin was shifted to the West Point Mint in 2001. At the same time, the bullion version of the coin was also shifted to West Point from the Philadelphia Mint, where it had been for just two years. To this day, all American Silver Eagle coins are struck at the West Point facility.

In 2001, Y2K fears had largely subsided, but the demand for American Silver Eagle coins remained relatively unchanged from 2000. There was a slight dip in overall Silver Eagle production from 9.83 million in 2000 to 9.74 million in 2001. However, there was an almost even offset between the drop in bullion coins produced in 2001 and the number of proofs struck.

On the obverse of all American Silver Eagles is Adolph A. Weinman’s Walking Liberty design, while the reverse features the modern heraldic eagle of the United States. The latter design came from then-US Mint Chief Engraver John Mercanti.