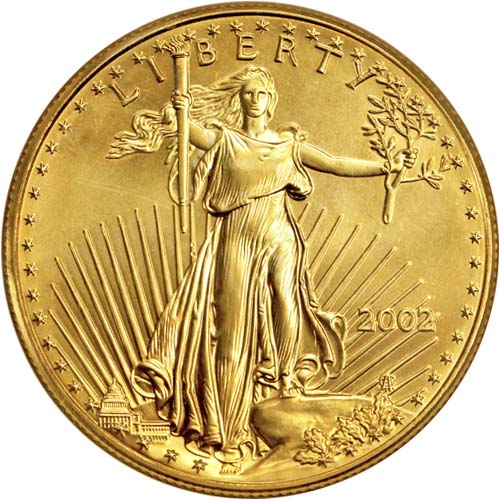 American Gold Eagle coins debuted in 1986 as history making coins from the United States Mint. Beginning in 1833, the US Mint moved away from striking its circulation gold coinage in the so-called crown gold alloy content. From 1837 onward, all US gold coins would feature a maximum of .900 gold content.

Each 2002 1 oz American Gold Eagle coin available to you today is packaged in a protective plastic flip. These coines were issued at a time when demand for the Gold Eagles cooled off following the surge in demand during the Y2K crisis in the late 1990s.

The obverse of all 2002 1 oz American Gold Eagle coins includes the design of Liberty created in 1907 by Augustus Saint-Gaudens. Considered the finest in American history, this image of Lady Liberty striding forth from the nation’s capital as a guiding light for the emerging world power appeared on the $20 Gold Double Eagle until 1933.

On the reverse of all American Gold Eagle coins, you’ll find the image of a nesting American bald eagle group. Inside the nest are a group of hatchlings. Outside the nest, there is a confident female standing guard over the group, while a powerful male bald eagle flies overhead with an olive branch in its talons.

American Gold Eagle coins are all produced by the United States Mint, with all modern versions of the coin struck at the West Point Mint facility.

We encourage JM Bullion shoppers to reach out to us. Our customer service team is available online through our live web chat and email services, as well as our toll-free phone number at 800-276-6508.