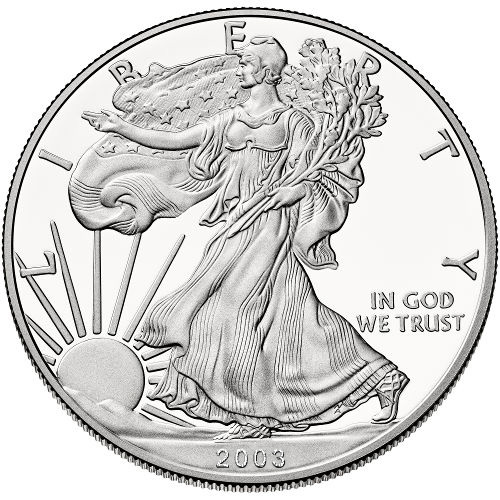 The early 2000s was one of the most stable periods of American Silver Eagle mintage in the programs 30-year history. While the 1980s and 1990s saw several small spikes and drops, the first 6 years of production in the 2000s were relatively even. Today, the 2003-W Proof American Silver Eagle coin is available for purchase through JM Bullion.

During the 1980s and 1990s, the American Silver Eagle coins saw production levels go through various highs and lows in mintage numbers. For example, mintage went steadily higher from 1988 to 1993, followed by a downward period from 1994 to 1998. Entering the 2000s, the story was much different.

Aside from a one-year spike in 2002, production of American Silver Eagle coins from 2000 to 2005 averaged almost the same amount annually. Each year, the American Silver Eagle was minted in numbers around 9.5 million. Digging into the numbers though, there was greater fluctuation in the two types of coins produced: bullion and proof.

Adolph A. Weinman’s Walking Liberty design was chosen as the primary feature used on the obverse of the American Silver Eagle. Created in 1916 and used on the Walking Liberty Half Dollar, it is representative of the nation’s constant march toward a brighter future.

The reverse features the first major design from US Mint Chief Engraver John Mercanti, who took over the job in 1986. He modernized the appearance of the nation’s heraldic eagle, adding 13 stars above its head to represent the original American Colonies.

If you have any questions about the 2003-W Proof American Silver Eagle, don’t hesitate to ask. A JM Bullion associate is available at 800-276-6508, online using our live web chat, or via our email address.