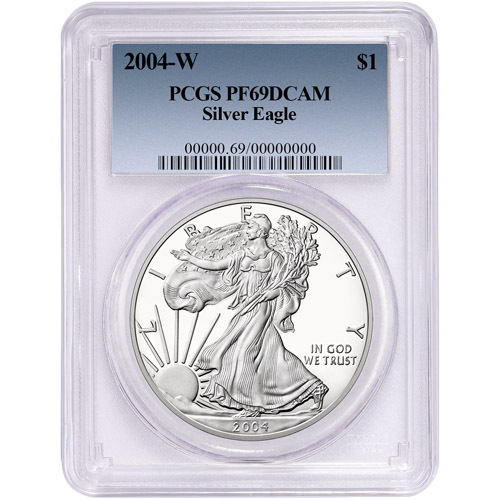 All of the 2004-W 1 oz Proof American Silver Eagle Coins in this product listing come with a near-perfect certification. Coins in PR69 condition have full, original mint luster with no more than two minor detractions. Those flaws are limited to minuscule contact marks or hairlines located outside of the primary focal fields of the coin. DCAM labels indicate coins that have deep-cameo visuals. The design strike on these coins is strong and frosted, while the background field is deeply-mirrored and clear.

On the obverse of 2004-W Proof American Silver Eagle Coins is a depiction of Walking Liberty. This visual of Liberty is one of the two most popular in American history. It features her figure in left-profile relief with the American flag draped around her as she walks toward the sun on the horizon.

The reverse field of the 2004-W 1 oz Proof Silver Eagle is an image of the heraldic eagle of the United States. The nations oldest coin design, this front-facing bald eagle was modernized for this series in 1986 by John Mercanti. The eagle supports the US national shield with its talons clutching the arrows of war and the olive branch of peace.

Please feel free to reach out to JM Bullion if you have any questions about these coins. Our team can assist you at 800-276-6508, online using our live chat, and through our email address.