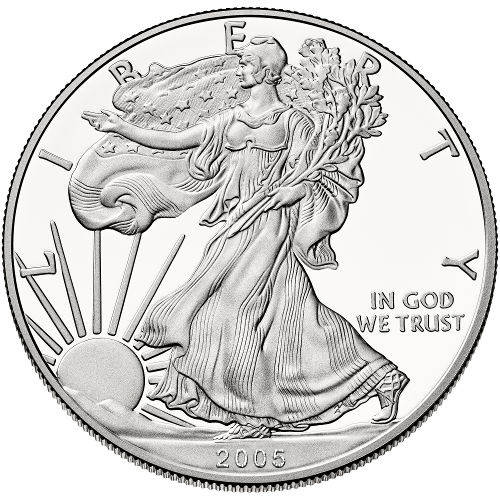 The United States Mint revamped the Walking Liberty design from Adolph A. Weinman after 39 years on the shelf for the obverse image on its all-new bullion and proof coin program in 1986. Weinmans design originally appeared on the Walking Liberty Half Dollar from 1916 to 1947, and is considered part of Americas Golden Age of coin design during the early 20th century.

In 2005, the United States Mint struck a total of 9.7 million American Silver Eagle coins. That figure represents a third consecutive year of mintage increases for the program. The bullion coin saw a minimal increase in production in 2005, up just 9,000 coins from 2004. On the other hand, the proof coin saw an increase of 15,000 coins from the previous year.

The boost in Proof American Silver Eagle mintage in 2005 marked just the second time in program history, to date, that the proof version of the coin had seen mintage increases over the course of four consecutive years.

As mentioned earlier, Weinmans Walking Liberty design graces the obverse of all American Silver Eagle coins. Youll also notice engravings of Liberty above the design, In God We Trust, and the year of issue below.

The reverse side of the coin features the heraldic eagle of the United States. Designed by John Mercanti, then-Chief Engraver of the US Mint, this image is iconic in American history and represents a modern version of the heraldic eagle in use on American currency since the 1790s.

Please direct your questions to a JM Bullion associate at 800-276-6508, chat with us live online, or email us.