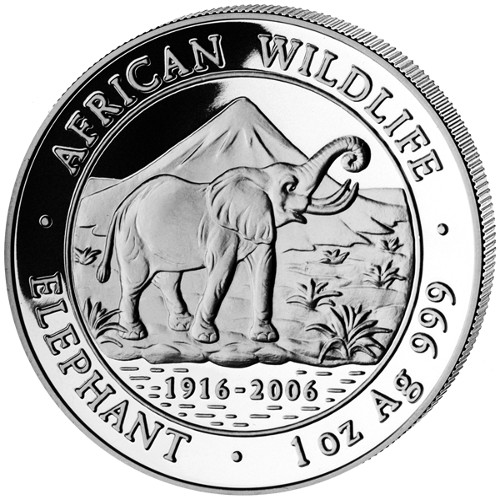 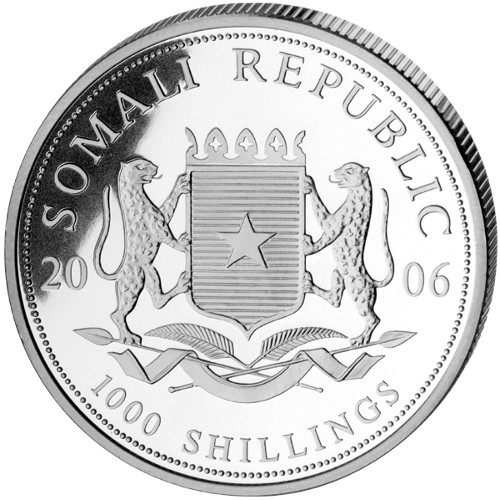 The 2006 1 oz Somalia Silver Elephant Coin is a key date in the series, with a lower mintage and high collector demand. This coin is in stock and ready to ship in brand new, BU condition. Lots of 20 will ship in mint-sealed Somalia tubes while smaller quantities are packaged in individual coin flips.

The African Elephant is one of the most recognizable animals in the world. Large and powerful, the elephant is often mistaken for being overly docile. When challenged, elephants can actually respond with great ferocity to protect members of its family, using their massive size as a deadly weapon.

The bush elephant, which is featured on the coin, is one of the more common sub-species and is well known as the largest land creature in the world. Its cousin the forest elephant, though slightly smaller in size, is still big enough to be listed as the third largest creature on Earth. The African Wildlife Series of coins from the Bavarian State Mint calls attention to the plight of African elephants by including it on the Somalia Silver Elephant Coin each year.

Unlike many other modern silver coin programs, the Somalia Silver Elephant Coin features a new design on the reverse side of the coin each year. The 2006 1 oz Somalia Silver Elephant Coin features a lone elephant on the savanna, ready to trumpet its booming sound across the open expanses of Africa. In the background, a snow-capped mountain rises toward the sky.

On the obverse side of the coin is the coat of arms for the Republic of Somalia. In the center is a shield with a single star in the middle of the design, with two leopards bracing the shield on either side. The engraving “Somali Republic” is featured above the image. The African Elephant coin series was introduced in 1999, though it was minted on behalf of the Republic of Somalia starting in 2004.

If you have questions about the Somalia Silver Elephant coins, please feel free to call JM Bullion at 800-276-6508. We are also happy to help you by answering any questions you have online via live chat and email for added convenience.