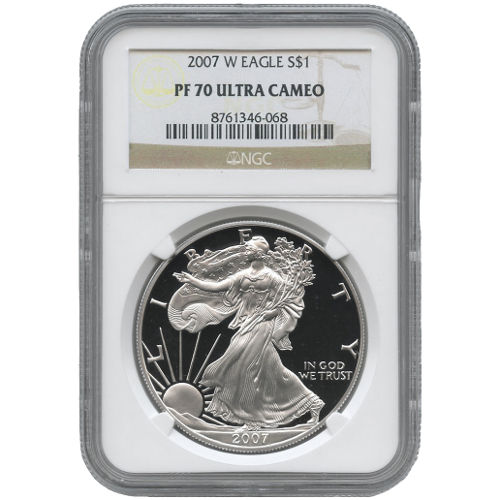 American Silver Eagle coins were introduced in 1986 after Congressional passage of the Liberty Coin Act. The bill approved the release of silver stores from the Defense National Stockpile, which were to be used exclusively for the production of a silver coin series for the country that would raise funds for the federal government.

The coin program originally consisted of a bullion and proof version only, with just a one ounce coin available. In 2006, upon the 20th anniversary celebration of the program, a special burnished coin was added to the lineup.

Each of the 2007 Proof American Silver Eagles available to you today is considered a perfect specimen by the NGC. Coins with a PF70 grade have their full, original mint luster and no detracting flaws of any kind.

The ultra-cameo designation is reserved for proof coins with a unique finish. The strong, frosted matte finish of the design sets on both sides gives them the appearance of floating above the deeply-mirrored, clear background fields of the coin.

On the obverse of all American Silver Eagle coins is the historic image of Walking Liberty. Created by Adolph A. Weinman in 1916, this image originally appeared on the Walking Liberty Half Dollar through 1947.

US Mint Chief Engraver John Mercanti created the heraldic eagle image used on the reverse of all coins in the program. Mercanti had just ascended to the position of Chief Engraver when he created this design. Since retiring from that post in 2010, the US Mint has not had an official Chief Engraver.

Please direct all of your questions to a JM Bullion associate at 800-276-6508. You can also connect with us online using our live web chat and email features.

Chris from RI - November 19, 2016
"I was going to buy this proof 70 coin from a competitor for a price point of double. I was doing a little shopping at JM Bullion and decided to check it out. After examining both proofs 70 coins from the two dealers I decided to go with JM Bullion. The price was half and it shipped fast and free also. When it arrived I couldn't believe my eyes, It was spectacular! Very high quality with certification. What a beautiful coin! And it is priced right. I will be buying all my silver eagle proof 70 coins from JM Bullion. Thanks for making coin collecting priced reasonably fun and enjoyable! CJP."