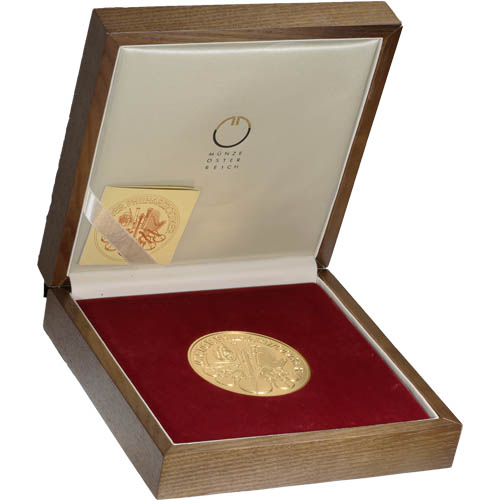 The Austrian Mint has celebrated various landmarks in the programs history with special strikings of the Austrian Gold Philarmonic. Although these 2009 20 oz Austrian Gold Philharmonics seem like a massive issue, it actually pales in comparison to the Big Phil struck in 2004 on the 15th anniversary of the coin. That one-time release weighed an astonishing 1,000 Troy ounces!

Nevertheless, 2009 20 oz Austrian Gold Philharmonics are nothing to sneeze at. The Austrian Mint produced only 6,027 of the coins with a special release in mind. The coins were released to the European, North American, and Japanese precious metals markets only with 2,009 coins allotted to each region. That mintage figure matched the date mark of the coins to celebrate the 20th anniversary.

On the obverse of the 2009 20 oz Austrian Gold Philharmonic Coin is the image of the Musikverein pipe organ. This is a fixed musical instrument built into the Golden Concert Hall where the Vienna Philharmonic Orchestra performs. The hall is located in the Innere Stadt borough of Vienna, the national capital of Austria.

The reverse face of 2009 20 oz Gold Philharmonic Coins includes a collection of orchestral instruments commonly used by the Vienna Philharmonic. Both this design and the obverse visual were created by Thomas Pesendorfer, the Chief Engraver of the Austrian Mint.

These 2009 20 oz Austrian Gold Philharmonic Coins are available to you today in Brilliant Uncirculated condition with the original Austrian Mint packaging. The Austrian Mint issued the 20th-anniversarycommemorative gold version of the coin with a velvet-lined wooden presentation box and a Certificate of Authenticity.

We encourage JM Bullion customers to reach out to us with questions at 800-276-6508. You can also connect with us live online through our chat service or send us an email at your convenience.