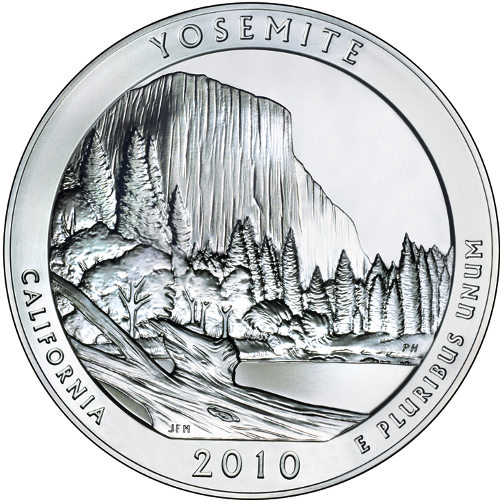 PLEASE BE AWARE THAT WE PURCHASE THESE COINS SECOND HAND AND SHIP IN THE EXACT CONDITION THAT WE RECEIVE THEM. IT’S NORMAL FOR THESE COINS TO HAVE BLEMISHES, INCLUDING SCRATCH MARKS AND GENERAL WEAR.

The third release of the America the Beautiful coin series for 2010 is the 5 oz ATB Yosemite silver coin. Like all coins in this series, the 5 oz Yosemite has a purity of 99.9% and imagery that is just as inspiring as the coin is valuable.

As part of the inaugural ATB series if coins, this and all others in the series promote and celebrate the many National Parks found across the United States. The ATB series of coins was first put into action in 2010, but is set to run continuously through 2021.

The US Mint is one of the most storied and historic mints in all the world, and has been in operation continuously since the late 1700s. While the mint was first tasked with producing the coinage of the newly formed United States, it now produces coins for various countries around the world. One of the newest and most attractive releases of the US Mint is the America the Beautiful series of coins. This coin series celebrates the momentous occasions and beautiful landscapes that make this country the world superpower that it is.

The now world-famous National Park System of the United States was first established in the late 1800s as a way of preserving the natural beauty of the North American landscape. Yosemite National Park was founded in 1890 and is not only one of the most famous parks in the system, it is also one of the oldest. With more than 700,000 acres, Yosemite is not the largest park but it is one of the most diverse. With massive mountain peaks, lakes, streams, rivers, and forests, you can experience all that Mother Nature has to offer at Yosemite.

The 5 oz ATB Yosemite silver coin does a great job of depicting and celebrating Yosemite National Park. The obverse side’s design is such that you get a feel for all the landscapes you will find in the park. In the foreground of the obverse is a downed tree sitting on the banks of a somewhat serene-looking lake. The background of the obverse’s image features an imposing rock face that extends far into the sky. Inscribed on the obverse side of the coin are the words “Yosemite”, “California”, and “E Pluribus Unum.” Also inscribed on this side of the coin is the 2010 year of minting.

The reverse side of the 5 oz ATB Yosemite is designed and laid out exactly like a United States quarter. Even down to the 25-cent face value, the coin’s reverse is identical to a US quarter-dollar. If any concerns of inquiries regarding this or any of our other products arise, feel free to call customer service toll-free at 800-276-6508. There are also live chat and email methods of getting in touch with our helpful support staff.