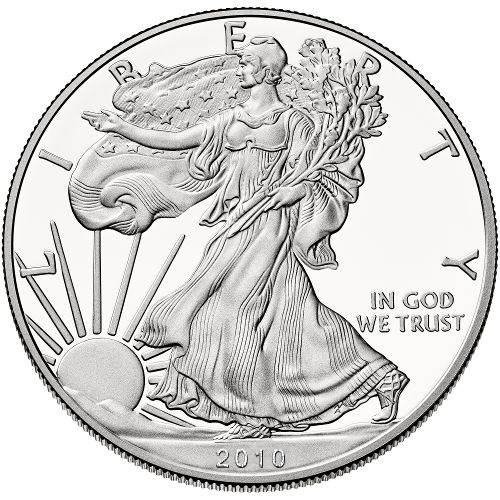 Proof American Silver Eagle coins had been struck by the United States Mint every year from 1986 to 2008, but not in 2009. Economic uncertainty and increased demand for investment-grade precious metals pushed the American Silver Eagle to new heights in 2009, even in the absence of the proof.

Bullion production in 2009 jumped 10 million, going from 20.5 in 2008 to 30.46 in 2009. Even the lack of proof and burnished options couldn’t stop the American Silver Eagle from setting a new sales record in 2009 of 30.46 million. The return of the proof version in 2010, coupled with continued economic woes, saw the Silver Eagle go even higher.

There were 34.7 million bullion coins struck this year, and proof production ramped back up to pre-2009 levels with nearly 850,000 coins available. 2010 remains the lowest mintage year post-2009 for the Proof American Silver Eagle.

Walking Liberty appears on the obverse face of the American Silver Eagle every year. Created in 1916 by Adolph A. Weinman, this design is representative of the nation’s persistent march toward a better, brighter future.

John Mercanti’s heraldic eagle design has featured on the reverse since 1986. Mercanti was hired as Chief Engraver of the United States Mint in 1986, making this his first major contribution in the post. He held that position until he retired in 2010.

If you have any questions, we encourage you to contact a JM Bullion associate. We’re available on the phone at 800-276-6508, online using our website’s hosted live chat service, or by submitting your questions to us in writing via email address.