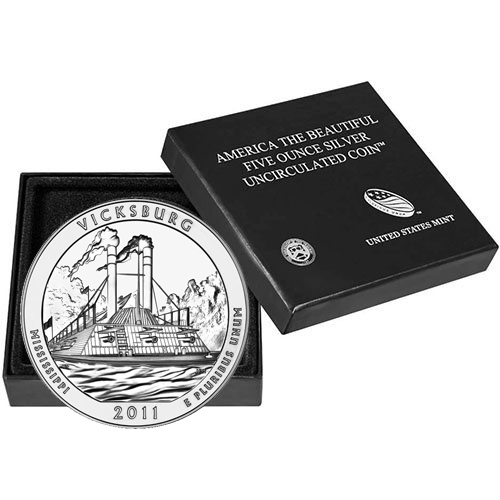 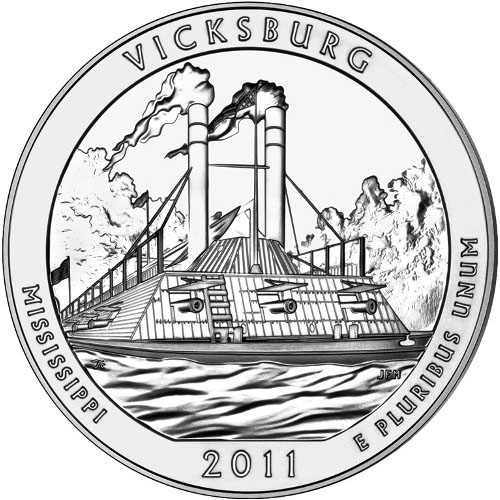 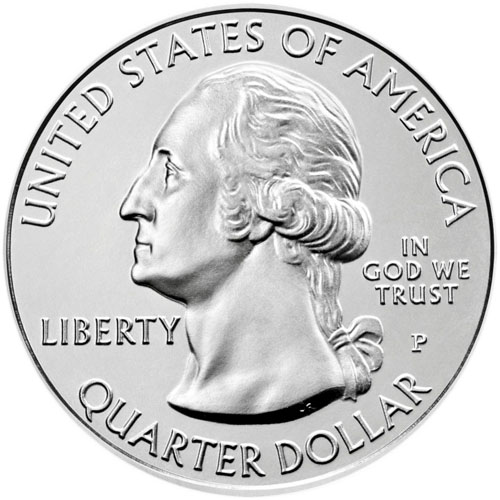 The ninth release of the America the Beautiful Series from the United States Mint marked the hallowed grounds at Vicksburg National Military Park. The site of a strategic Union victory during the Civil War, Vicksburg National Military Park today preserves the memory of those who fought and died there, representing Mississippi in the ATB Series. Today, 2011-P 5 oz Burnished ATB Vicksburg Silver Coins are available to you online from JM Bullion.

Vicksburg National Military Park preserves the site where Union forces clashed with the Confederacy during the Civil War Battle of Vicksburg. Taking place over the course of nearly four months and ending on the young nation’s birthday of July 4, 1863, the battle was fought in large part for control of the Mississippi River.

All 2011-P 5 oz Burnished ATB Vicksburg Silver Coins are available with their original commemorative boxes from the United States Mint. Also included with your purchase is a Certificate of Authenticity.

On the obverse of all 2011-P 5 oz Burnished Silver Coins is the image of President George Washington. This design was created in 1932 for the circulation quarter by John Flanagan, who used a 1786 bust of the nation’s first president as inspiration for his left-profile portrait used on the coins.

The reverse face of 2011-P 5 oz Burnished ATB Vicksburg Silver Coins includes the image of the USS Cairo gunboat as it moves along the Yazoo River. The Union sought to cut the Confederacy in half along the Mississippi River by separating Louisiana, Arkansas, and Texas from the states of the Deep South.

The USS Cairo was sunk on December 12, 1862, on the Yazoo River and has since been raised as part of the more than 1,325 historic markers within the park that recall the battle fought on the land over the course of several months during the greater Vicksburg Campaign in the South.

Please feel free to reach out to JM Bullion customer service with questions. You can call us at 800-276-6508, chat with us live online, or simply send us an email with your questions.