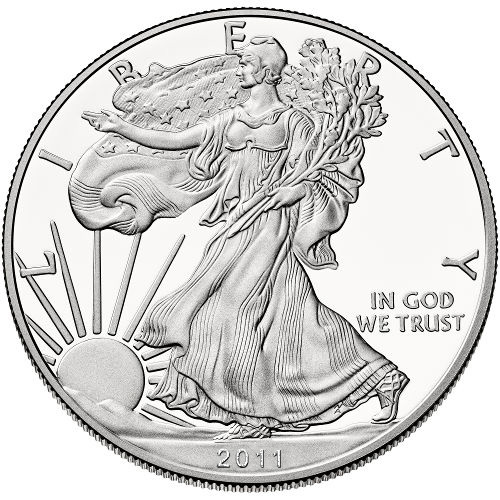 American Silver Eagle coins set a sales record for a single year for the fourth year in a row in 2011. For the third year in a row, the program saw its bullion coins hit a brand-new high-water mark, with 34.7 million bullion coins sold, up from 30.5 million in 2010. Two years after its return from a hiatus, the Proof American Silver Eagle was also up.

The 2011 Proof American Silver Eagle had one of the three highest mintage levels in program history, surpassed only by introductory 1986 proofs and the 20th anniversary 2006 proofs. In total, a then-record 40.02 million American Silver Eagles were sold in 2011, but that was powered by a number of additional strikings as well.

In addition to its usual coins, the United States Mint brought back the burnished American Silver Eagle. After not offering the coin in 2009 and 2010, 409,000 were struck, with an additional 99,000 at the San Francisco Mint. There was also a striking of 99,000 reverse proof coins at the Philadelphia Mint in 2011. Both of these deviations were sold only as part of the American Eagle 25th Anniversary Silver Coin Set.

On the obverse side of all American Silver Eagle coins is the image of Walking Liberty from the nation’s circulating half-dollar coin (1916-1947). The reverse features the heraldic eagle design from US Mint Chief Engraver John Mercanti, which is exclusive to this coin series.

If you have any questions, please don’t hesitate to ask a JM Bullion associate. You can reach out to us on the phone at 800-276-6508, connect with us online using our live web chat service, or submit your questions in writing via email.