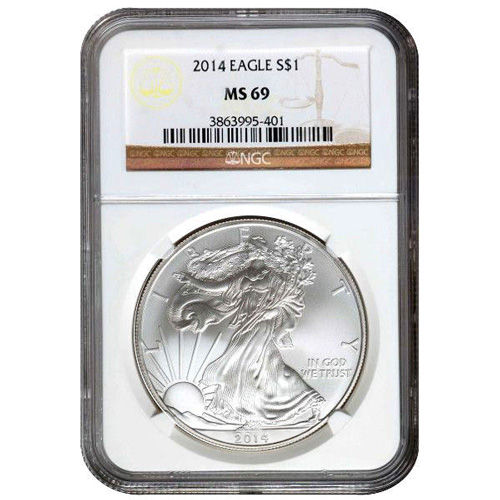 When the NGC issues a Mint State 69 grade to a coin, such as these 2014 American Silver Eagles, it certifies the coin’s impressive condition and value. An MS69 coin maintains its full, original luster with an attractive, sharp strike for the date and mint. There may be as many as two miniscule contact marks on the coin, but these flaws are not visible without magnification and exist outside the primary focal area of a coin.

American Silver Eagle coins were introduced in 1986 following passage of the Liberty Coin Act of 1985. All coins in the series are struck using silver sourced from within the United States and held in the Defense National Stockpile. One side of the coin boasts Adolph A. Weinman’s classic Walking Liberty design, while the Mint’s chief engraver, John Mercanti, designed the heraldic eagle on the opposite side.

On the obverse side of the coin is Weinman’s Walking Liberty, as first used on the Walking Liberty Half Dollar between 1916 and 1947. The reverse bears the image of the heraldic eagle, featuring an array of 13 stars over the eagle’s head to represent the original American Colonies. These silver bullion coins are struck using .999 fine silver and bear a face value of $1.

If you have any questions about these 2014 American Silver Eagles, we encourage you to contact a JM Bullion associate. You can reach our team members at 800-276-6508, online using our website’s live chat, and via email.