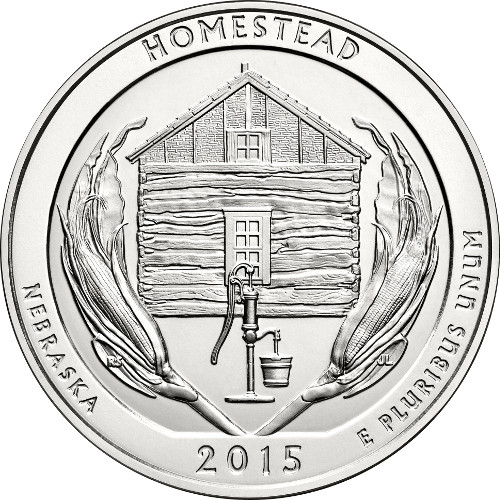 America is a nation with various, stunning natural environments that have made the country what it is today. From breathtaking coastal regions and sky-high mountain ranges, to wild prairies and farmland that stretches to the horizon, America is a land of bounty. The America the Beautiful coin series from the United States Mint celebrates important historical moments and places from American history. The imagery on this coin depicts the westward expansion of America through the display of Homestead National Park in southeastern Nebraska.

President Abraham Lincoln pushed for greater westward expansion through the Homestead Act of 1862, allowing men and women to stake a claim on land in the West. Nebraska was a vital jumping-off point in the race to settle the West. President Theodore Roosevelt later established the National Park Service, proclaiming 18 regions as national parks.

The obverse side of the 2015 5 oz ATB Homestead Silver Coin features a stylized log cabin in the background, water pump in the foreground, and corn stalks encircling the image. Representative of Homestead National Park, the image pays homage to the first homestead claimed under Lincoln’s Homestead Act.

On the reverse is a reproduction of the US quarter. President George Washington is featured in a left-profile portrait, with the engravings “United States of America,” “In God We Trust,” “Liberty,” and the coin’s face value surrounding his image.

The United States Mint struck the 2015 5 oz ATB Homestead Silver coin as the 26th coin in the America the Beautiful series. In total, the Mint plans to release 50 commemorative silver coins as part of the series, representing one national park, historic location, individual, or moment from American history in each state.

If you have any questions about the all new 2015 5 oz ATB Homestead National Park Silver Coin or any of our other products, don’t hesitate to give us a call at 800-276-6508. Additional support is available via live chat and email for added convenience.