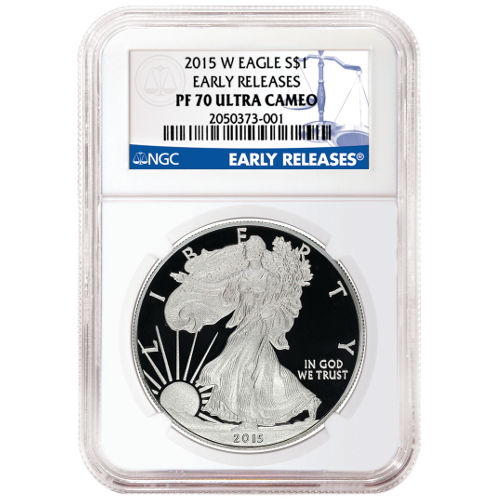 Each of the 2015 American Silver Eagles available for purchase here today is part of the US Mint’s Early Release series. The Early Release labels designate that the coins were received by NGC within the first 30 days of the coin’s release. Similarly, coins shipped in sealed US Mint boxes that arrive at NGC-approved depositories within that same time frame are considered Early Release coins.

When a coin receives a PF70 grade from the NGC, it identifies the coin as a perfectly struck proof with no flaws or signs of wear. These particular American Silver Eagle coins are always in demand because they were struck with pristine dies early in the production cycle, adding to the coin’s perfect condition. The Ultra Cameo, or UCAM, designation is reserved for proof coins with a strong, frosted design set against a background field that is deeply mirrored and clear.

American Silver Eagle coins feature the same design on each side from year to year. On the obverse is Adolph A. Weinman’s image of Walking Liberty. The depiction of Lady Liberty walking toward the sunset, draped in the American flag, is representative of America’s constant march toward a brighter future. The reverse features the heraldic eagle as designed by chief engraver John Mercanti.

The United States Mint was founded in 1792, making it one of the oldest facilities in the Western Hemisphere. Each year, the San Francisco, Philadelphia, and West Point Mints handle production of the coins for the Treasury Department. All American Silver Eagle coins are struck using .999 pure silver sourced from within the US.

If you have questions about these American Silver Eagle Coins, please feel free to contact a JM Bullion associate. Our team members are available on the phone at 800-276-6508, and online using our live web chat and email.