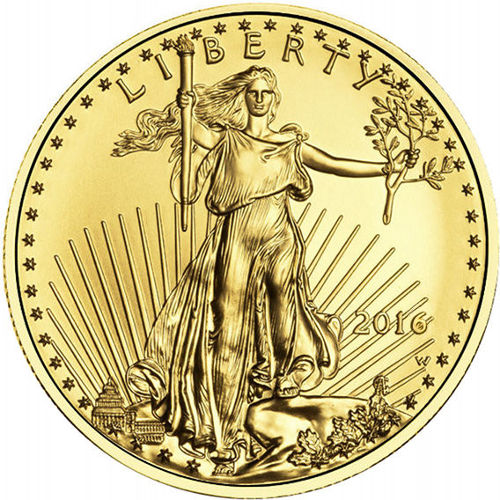 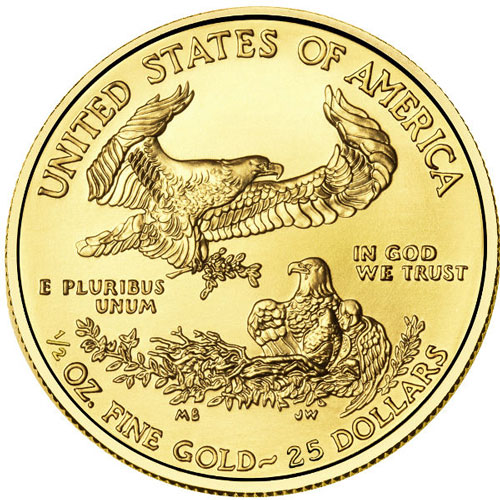 There are few coins in the world as popular as the American Gold Eagle. The official gold bullion coin of the United States, these coins are struck on an annual basis in bullion, proof, and burnished versions. The bullion version of the coin is highly sought-after by investors, and now the 2016 ½ oz American Gold Eagle coin is available in Brilliant Uncirculated condition from JM Bullion.

American Gold Eagle coins were introduced in 1986 by the United States Mint. These coins were originally produced in just a bullion and proof version. For the first year of production, bullion coins were available in all four fractional weights currently available from the US Mint: 1 oz, ½ oz, ¼ oz, and 1/10 oz.

Production of American Gold Eagles has ebbed and flowed significantly in its history. There have been three peaks in production history, with the first coming as the coins were introduced in 1986. The mid to late 1990s saw a second spike in production with the approach of Y2K, and the third peak just passed as the global economic recession resulted in increased demand for gold.

Each of the 2016 ½ oz American Gold Eagle coins available in this product listing represents the 30th anniversary of the program. Bullion versions of the coin have been struck every year for 30 years, marking a significant milestone in the program’s history. The BU condition of each coin means there are no signs of wear and tear, with potential breaks in the luster, spotted surfaces, or contact marks possible on the surface.

The reverse of all American Gold Eagles features the exclusive design of nesting bald eagles created by Miley Busiek in 1986. Augustus Saint-Gaudens’ Lady Liberty design from 1907 has featured on the obverse for every production year of the American Gold Eagle.

Produced by the United States Mint, these coins were originally struck by the West Point Mint, San Francisco Mint, and Philadelphia Mint. Today, all American Gold Eagles are struck at West Point.

If you have any questions, please don’t hesitate to ask. JM Bullion associates are available at 800-276-6508, online using our live chat, and via email. If you are interested in similar products, be sure to check out JM Bullion’s collection of Uncirculated Gold Eagles.

Rick from OH - July 22, 2016
"Although I have ordered from JM Bullion dozens of times over the past three years, up to this point, all orders have been for various silver products. The 2016 AE 1/2 oz. Gold coin is my first gold purchase from your wonderful company. My order arrived in three days, wrapped perfectly and discretely. This coin is pristine - in perfect condition. I will order another one later this month. JM Bullion continues to be my number one choice for bullion."

Michael from CA - February 24, 2016
"Received my Gold American Eagle less than 48 hours from the time of order. Discreetly and securely packaged. I appreciate the care and service. JM Bullion is where I get my gold and silver."