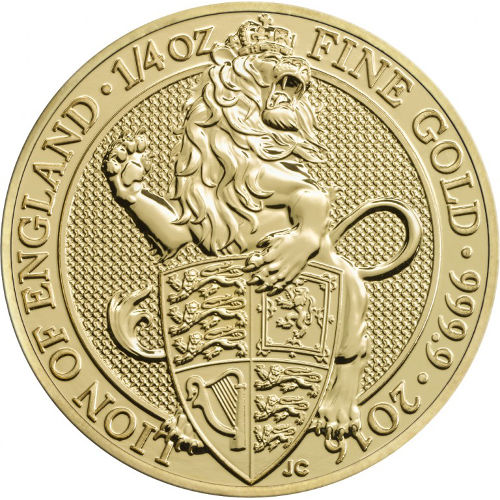 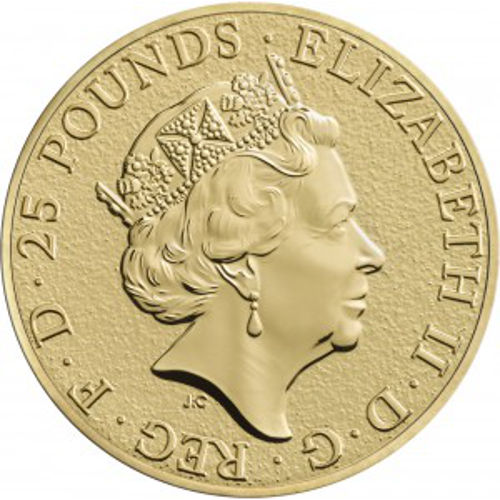 The smallest coin in the British Gold Queens Beast coin series is the 1/4 oz gold option, which is one of three coins offered in an exciting new series from the Royal Mint. Including images of those animals from Queen Elizabeth II’s 1953 coronation, the series will eventually feature a total of 10 different designs. Right now, the 2016 1/4 oz British Gold Queens Beast coin is available from JM Bullion.

Each of the 2016 1/4 oz British Gold Queens Beast Coins in this product listing is a Brilliant Uncirculated specimen. Coins in BU condition feature no signs of wear and tear, though you may notice minor flaws such as breaks in the luster, spotted surfaces, or contact marks from the striking process.

Queen Elizabeth II ascended to the throne of England in 1952 following her father’s abdication as King of England. Her official coronation as the new Queen of England was in 1953, and during her ceremony there were wooden statues of 10 heraldic creatures present.

The first of these designs is the heraldic Lion of England, the most important and visible of the creatures. The lion played a key role in British heraldry, often used in the coat of arms by many knights during the Early Medieval period. Today, the nation’s football team is often referred to as the Three Lions, a nod to the use of three lions on the country’s heraldic shield.

On the reverse side of each 2016 1/4 oz British Gold Queens Beast Coin you’ll find the image of an imposing lion standing on its hind legs, with one paw clutching the coat of arms of the Royal Family and the other paw poised to strike at the nation’s enemies.

The obverse of all British Gold Queens Beast coins features the all-new right-profile portrait of Queen Elizabeth II. Her Majesty’s portrait has been updated three times now since her coronation in 1953. The latest, introduced in 2015, comes from Royal Mint engraver Jody Clark, who created the images on both sides of this coin.

Founded as the London Mint in the 9th century, the Royal Mint is the official sovereign mint of the United Kingdom and is one of the oldest operating mint facilities in the world today.

If you have any questions, please don’t hesitate to ask. JM Bullion associates are available on the phone at 800-276-6508, online using our live web chat, and via our email address. To see similar products, check out our full selection of British Gold Coins.

Rosanne from IL - May 18, 2018
"Picked up a few of these QB 1/4 oz Au coins. My first order was shipped on time and packaged wonderfully. I was so pleased I bought a few more but the packaging was surprisingly not up to JMBullion normal standard....not bad but my coins fell out of their flips but were still in bubble wrap. Someone had packed the coin in JM flips backwards so coins came out. If flip had been folded properly the coins would have stayed in the flip. Thankfully the coins did not get damaged but the risk was there. I think this was atypical for JM hense 4 stars. I actually think the flips were misprinted so to display their logo properly leaves the flip open for coins to fall out. I'm sure they will fix this. Still happy customer cause the coins did not get damaged(lucky I guess)."

Christopher from IL - June 11, 2017
"JM Bullion delivered a perfect coin. The size on these 1/4 oz are fantastic. The queens beast series is a sure winner all the way around. Once again, JM Bullion the best precious metals dealer out there."