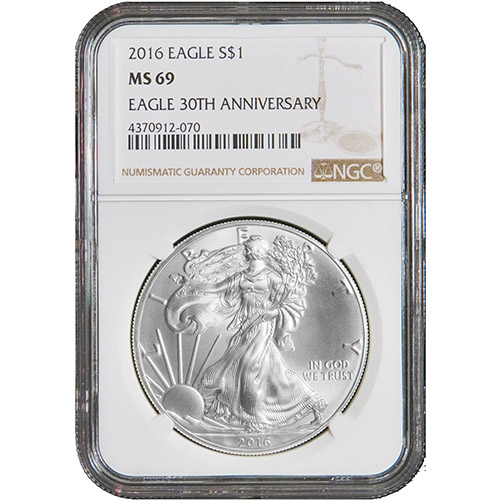 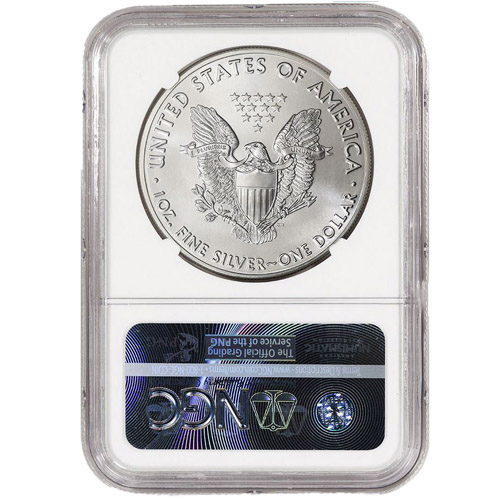 American Silver Eagle coins are available from the United States Mint on an annual basis. Originally available in bullion and proof versions only, the mint added a burnished coin in 2006 for the 20th anniversary of the coin’s release.

The 2016 American Silver Eagle coin is part of the US Mint’s 30th anniversary celebration for the series, which includes a first-ever use of edge lettering on the nation’s official bullion coin program. However, the proof version of the coin is the only one receiving edge lettering.

Each of these 2016 American Silver Eagle coins is a bullion coin with a MS69 grade from the NGC. Coins in this condition exhibit full, original mint luster, but also feature a maximum of two minor detracting flaws on the surface areas. These are limited in nature to minuscule hairlines or contact marks and found only outside the primary focal areas of the coin.

On the reverse of the 2016 American Silver Eagle coin you’ll find the heraldic eagle of the US. This classic design was modernized for this release by John Mercanti, who refined this design in 1986 and served as Chief Engraver of the US Mint from 1986 to 2010.

All American Silver Eagle coins are produced by the United States. While these bullion coins feature no mint marks, the West Point Mint handles the bulk of production, along with the San Francisco Mint, which now provides secondary production to support the immense demand for these coins.

If you have questions, please don’t hesitate to contact JM Bullion. You can reach our customer service team on the phone at 800-276-6508, online using our live chat, and via our email address.