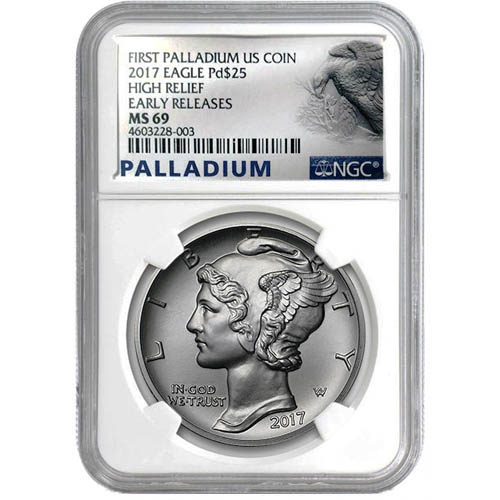 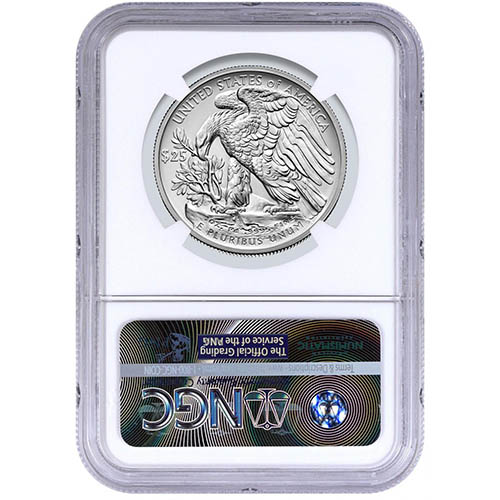 Palladium has seen limited use as an annual-release bullion metal for coinage programs. One of the most popular today is the Canadian Maple Leaf, and this is the first foray into the use of palladium in the American Eagle Series. Like other American Eagle coins, an iconic image of Lady Liberty was chosen for the obverse.

The obverse of the 2017 1 oz American Palladium Eagle Coin features Winged Liberty. Created in 1916 by Adolph A. Weinman, it featured on the nation’s 10-cent piece for decades and was often mistakenly (at first) referred to as the Mercury Dime because the left-profile portrait of Liberty on the coin seemed to depict Mercury, the winged messenger god of the Romans.

Wearing a Phrygian cap with wings, Liberty is captured in left-profile relief and surrounded by engravings of “Liberty,” the national motto “In God We Trust,” the year of issue for the coin, and Weinman’s initials of “AW.”

On the reverse of the American Palladium Eagle Coins you’ll find the depiction of the bald eagle as it sits on a rocky cliff edge with a large olive branch in its talons. This design was also created by Adolph A. Weinman and originally featured on a commemorative medal a decade before his Winged Liberty design was created.

All 2017 1 oz American Palladium Eagle Coins in this listing are in near-perfect Mint State 69 condition. Coins in this condition show full, original mint luster but also have a maximum of two minor detracting flaws such as minuscule hairlines or contact marks. Early Release coins are those received by the NGC within 30 days of their initial release from the US Mint.

We encourage JM Bullion customers to contact us with questions about all our coins. You can call us at 800-276-6508, chat with us live online, or send us an email with your inquiries. The price of gold and silver, as well as platinum and palladium, are listed on our homepage and regularly updated!