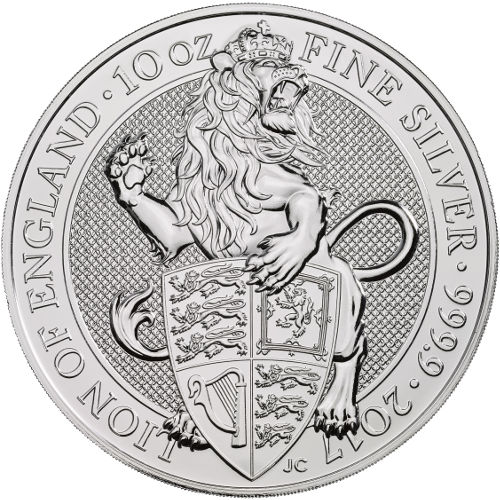 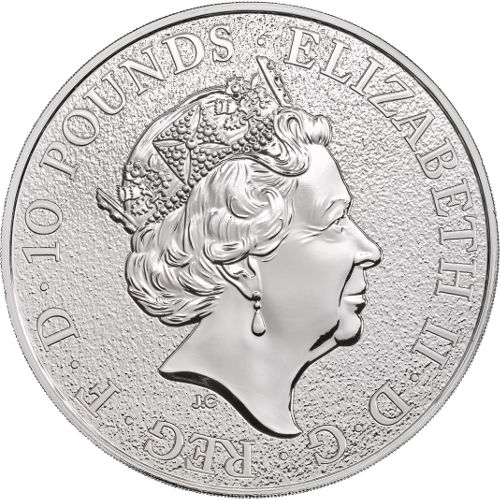 The Royal Mint continues its popular Queen’s Beast Collection in 2017 with not only new designs in the series, but new weights and precious metals available as well. The Lion of England design launched the series in 2016, and it returns in 2017 on a platinum coin and a 10 oz silver coin. Today, the 2017 10 oz British Silver Queen’s Beast Lion Coin is available to you online from JM Bullion.

The Queen’s Beast Collection of coins from the Royal Mint debuted in 2016 with a 1 oz gold, 1/4 oz gold, and 2 oz silver coin. There are 10 designs scheduled to be released by the Royal Mint in this collection, each one representing the creatures carved into sculptures for display during Queen Elizabeth II’s official coronation ceremony in 1953.

As of 2017, the Royal Mint has released a total of 3 designs in the collection and you’ll now find a new platinum coin and 10 oz silver option in the Lion of England design. This is the perfect expansion of the series and offers something for everyone looking to buy silver.

All 2017 10 oz British Silver Queen’s Beast Lion Coins in this product listing are in BU condition. Coins in BU condition feature no signs of wear and tear, but you might notice minor flaws including breaks in the luster, spotted surfaces, and contact marks from the production process at the mint.

The reverse of all Queen’s Beast Lion coins includes the image of the Lion of England. One of the most revered images in the monarchy, the Lion of England in this design stands behind the heraldic shield of the kingdom on its hind legs, poised to strike out at any who threaten the United Kingdom.

On the obverse of the 2017 10 oz British Silver Queen’s Beast Lion coin you’ll find the fifth-generation depiction of Queen Elizabeth II. Her Majesty’s effigy appears on the obverse of all British coinage and has been since she ascended to the throne in 1952. This design came from Jody Clark in 2015, who at 33 years old is the youngest designer from the mint to create Her Majesty’s effigy.

Please don’t hesitate to reach out to JM Bullion with questions. You can contact our customer service team at 800-276-6508, or connect with us online through our live chat and email address options.

CARL from NY - August 23, 2018
"The first of this collection has started off on a good footing. This 10oz coin is a fine crafted work of art with excellent details. It\'s absolutely a beautiful treasure to own."

Christopher from FL - May 06, 2017
"Absolutely stunning. Very impressive. What a beast of a coin."