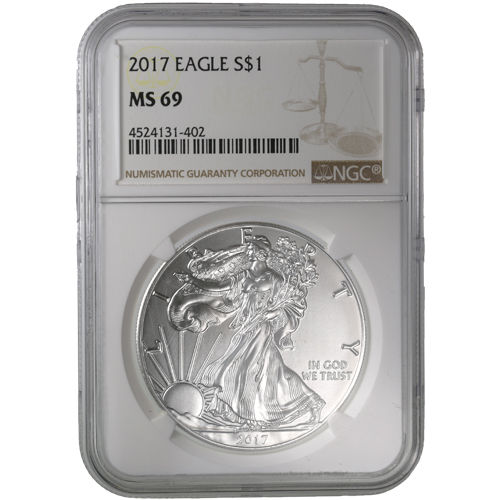 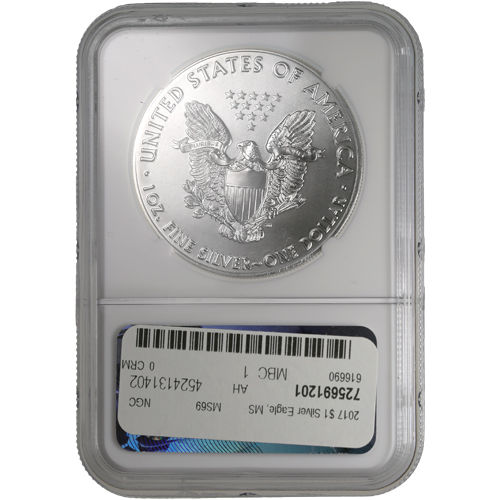 The American Silver Eagle coin is one of the world’s most popular, with annual sales in recent years that eclipse 30 million units with relative ease. Although 2016 saw sales fall from back-to-back record-breaking years, with just over 37 million coins sold it was certainly far from a poor performance. Right now, the 2017 American Silver Eagle Coin is available with NGC certification from JM Bullion.

Each 2017 American Silver Eagle Coin available to you today from JM Bullion is in near-perfect condition in the eyes of the NGC. Mint State 69 coins feature full, original mint luster and a maximum of two minor detracting flaws.

These flaws are limited in scope and range. You’ll find only minuscule hairlines and/or contact marks on the surface areas, and those flaws are located only outside of the primary focal areas on the coin’s surface.

The American Silver Eagle is the official silver bullion coin of the United States. Introduced in 1986, the coins are now available from the US Mint each year in bullion, proof, and burnished versions with only a 1 oz weight available in all three versions.

On the obverse of the 2017 American Silver Eagle Coin, Walking Liberty appears in brilliant left-profile relief as she strides toward the setting sun in the distance. Adolph A. Weinman created this design in 1916 for use on the nation’s half-dollar coin, which it remained on through 1947.

All American Silver Eagle coins, bullion, proof, and burnished, are struck by the West Point Mint for the most part. The San Francisco Mint, original home of the coins, rejoined the rotation with supplemental striking of the bullion coins only in 2011 to assist the US Mint system in keeping up with the massive demand for these coins.

If you have any questions, please don’t hesitate to ask. JM Bullion customer service is available at 800-276-6508, online using our live chat, or via our email address.