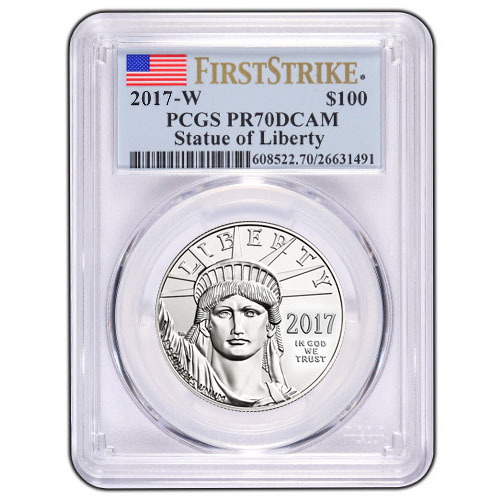 Proof American Platinum Eagle coins were unveiled by the United States Mint on June 6, 1997. This was the first addition of a new coin to the series in the history of the American Eagle collection, which debuted in gold and silver in 1986.

Each year the Proof Platinum Eagle is released, there is a new design on the coin’s reverse face. Thomas D. Rogers, a former sculptor-engraver at the United States Mint, designed the original proof imagery and it has never reappeared on the reverse of the proof coinage. In fact, no design has been used more than once on the reverse.

The obverse of all Proof American Platinum Eagle coins features the Statue of Libertys face as designed by John Mercanti. It captures the solemn look on her face as she looks out to the world waiting to welcome the tired, poor, and huddled masses of the world yearning to breathe free in America.

All 2017-W 1 oz Proof American Platinum Eagle Coins in this listing are available as perfect specimens from the PCGS. Coins in PR70 condition have full, original mint luster and lack all detracting flaws on the surface areas.

Additionally, these coins have a DCAM designation and First Strike label. Deep-cameo coins have strong, frosted devices and deeply-mirrored, clear background fields. FS refers to coins received by the PCGS within the first 30 days of the US Mints 2017 release date for Platinum Eagle coins.

We encourage JM Bullion customers to contact us with questions. You can call us at 800-276-6508, chat with us live online, or simply send us an email.