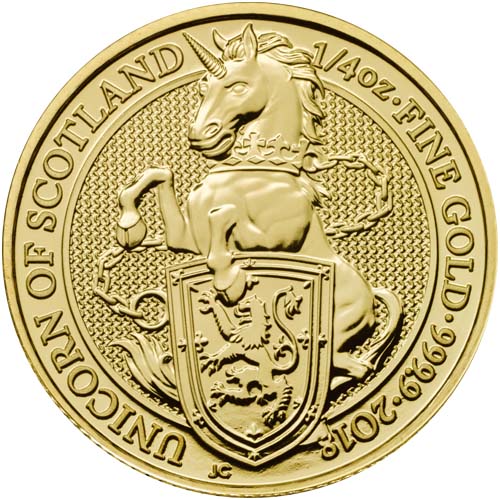 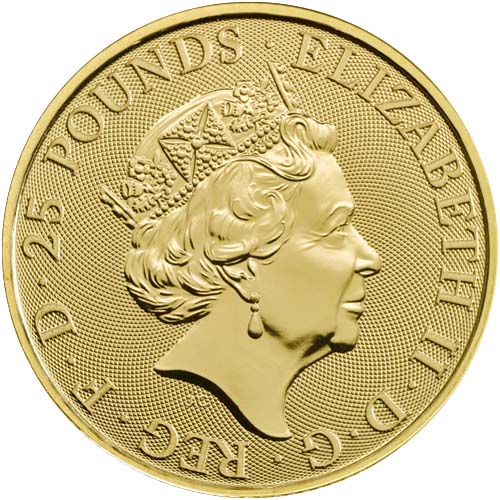 The Queen’s Beast collection of silver and gold bullion coins is ready with a fourth release in the collection. The first coin in the 2018 issue series for the bullion version brings the Unicorn of Scotland design to the collection, an image which is already available in the proof collection as a 2017 issue coin. Right now, the 2018 ¼ oz British Queen’s Beast Unicorn Gold Coin is available to purchase online from JM Bullion.

Each 2018 ¼ oz British Queen’s Beast Unicorn Gold Coin is available to you in BU condition. Coins in this condition exhibit no signs of wear and tear, though you may notice minor flaws ranging from breaks in the luster and spotted surfaces to contact marks from the coining process.

The Unicorn of Scotland is the fourth design issued in the bullion release of Queen’s Beast coins following, in order, the Lion of England, Griffin of Edward III, and the Red Dragon of Wales. Curiously enough, the Unicorn of Scotland has already appeared in this series in one form as the second release in the proof collection of coins.

Scotland’s representative creature, the unicorn is a mythical beast believed by past societies to be extremely rare and possess the power to heal. Adopted by the Scots under William I in the 12th century, the Unicorn of Scotland is today part of the greater British Royal Coat of Arms alongside the Lion of England.

On the reverse of the 2018 ¼ oz British Queen’s Beast Unicorn Gold Coin you’ll find the image of the Unicorn of Scotland. It is depicted standing on its hind legs with a massive chain linked to a crown around its neck that leads back down to the royal shield with the Lion of England upon its face.

The obverse of all British Queen’s Beast Gold Coins features the latest effigy of Queen Elizabeth II. Her Majesty’s portrait on these coins comes from Jody Clark, who at 33 years old became the youngest Royal Mint engraver to develop the Queen’s portrait for British coinage in 2015.

If you have any questions, please don’t hesitate to contact JM Bullion. You can reach us on the phone at 800-276-6508, online using our live chat, and via our email address.