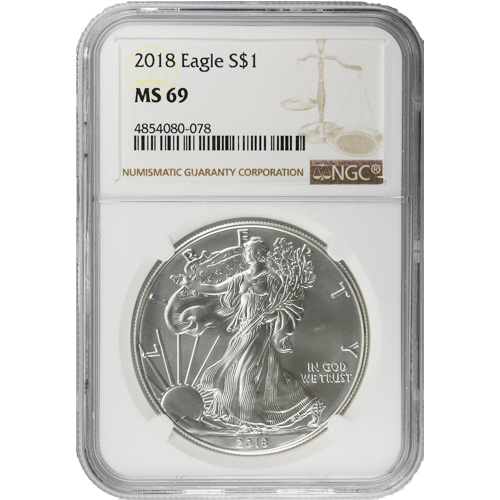 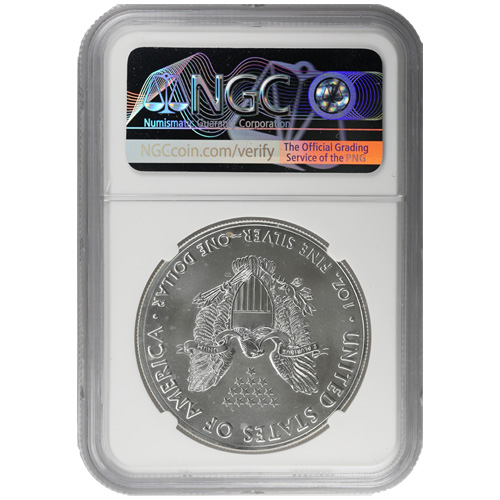 The American Silver Eagle is the most popular coin from the United States Mint. Each year, the US Mint strikes and sells these coins in the millions, with figures above 30 million annually from 2009 to 2016. The 2018 1 oz American Silver Eagle Coin is currently available to you for purchase online from JM Bullion in near-perfect condition.

American Silver Eagle coins were massive sellers during the Great Recession, peaking at 47 million coins sold in a single year in 2015. Since then, numbers have declined as markets have improved and silver prices have cooled further. However, the American Silver Eagle still remains immensely popular with investors and collectors alike.

On the obverse of 2018 1 oz American Silver Eagles is the image of Walking Liberty. This popular design first appeared on the US half-dollar coin from 1916 to 1947. Created by Adolph A. Weinman, it depicts the figure of Liberty as she walks toward the horizon with her hand outstretched and oak and laurel branches in her left hand.

The reverse side of 2018 American Silver Eagle Coins features the heraldic eagle of the United States. This design has featured on countless coins dating back to the first US coins in 1794. This modern design was updated in 1986 by John Mercanti and features the bald eagle behind a shield clutching the arrows of war and olive branch of peace, along with a cluster of 13 stars above its head.

These 2018 1 oz American Silver Eagle Coins earned a near-perfect certification from the NGC. Coins in Mint State 69 condition feature full, original mint luster with a maximum of two minor detracting flaws. These flaws are limited to minuscule contact marks and hairlines found only outside the primary visual areas of the coins surface.

All American Silver Eagle Coins are primarily struck by the West Point Mint. The US Mints San Francisco Mint facility has provided supplemental coining in recent years to help meet demand, but bullion coins feature no mint marks to differentiate the mint of origin.

We encourage JM Bullion customers to contact us with questions at 800-276-6508. You can also reach out to us online through our live chat service and email address with your inquiries. Youll find the latest price of silver on our website at all times.