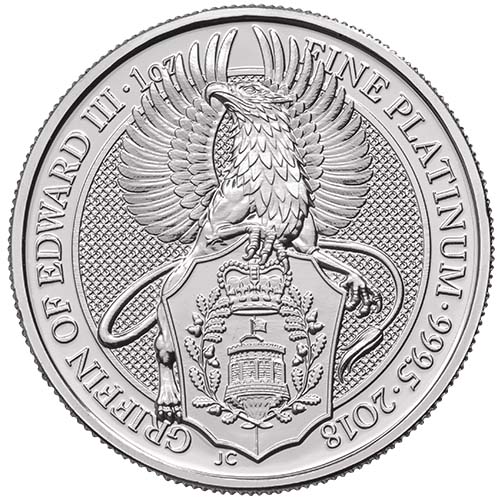 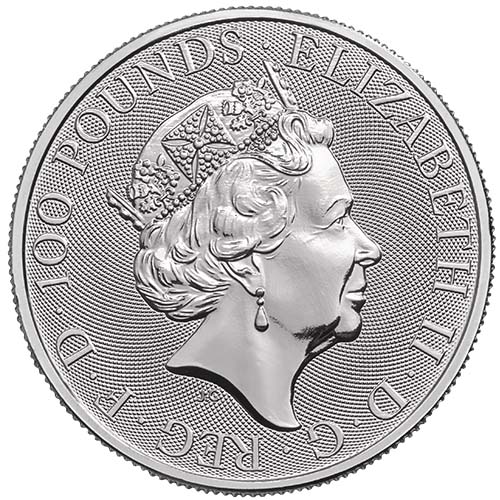 The Griffin of Edward III was the second design release from the Royal Mint’s Queen’s Beast collection in early 2017. The series includes 10 designs in total, each one reflective of a carved statue present in Westminster Abbey during the 1953 coronation of Queen Elizabeth II. Now, the Griffin returns on a beautiful 10 oz silver and 1 oz platinum coin in 2018. Today, 2018 1 oz British Platinum Queen’s Beast Griffin Coins are available to you online from JM Bullion.

All 2018 1 oz British Platinum Queen’s Beast Griffin Coins available here are in BU condition. Coins in BU condition show no signs of wear and tear, however flaws are possible. The production process can result in minor issues ranging from breaks in the luster and spotted surfaces to contact marks.

The reverse of all 2018 1 oz British Platinum Queen’s Beast Griffin Coins features the imposing image of the griffin. Emblazoned upon the private seal of King Edward III, in this design the griffin stands perched above the Round Tower in Windsor Castle, the location where Edward III was born.

On the obverse of British Platinum Queen’s Beast Griffin Coins is the portrait of Queen Elizabeth II. Her Majesty features on the obverse of all British coinage, and her image is routinely updated. This is the fifth-generation depiction which was completed in July 2015 by Jody Clark, who at 33 years old became the youngest Royal Mint engraver to complete the Queen’s effigy.

Please feel free to reach out to JM Bullion with questions. You can reach our customer service team at 800-276-6508, online through our live chat, and via our email address.