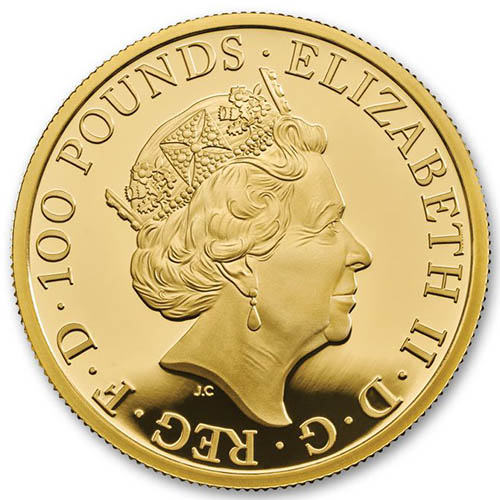 The Proof Queen’s Beast Series of silver and gold bullion coins from the Royal Mint brings the same beautiful designs of the bullion series to low-mintage collectible coins. The proof collection debuted in 2017 with the Lion of England and in this third issue, the Red Dragon of Wales appears on the collectible coin. Right now, 2018 1 oz Proof British Gold Queen’s Beast Dragon Coins are available to purchase online from JM Bullion.

Each 2018 1 oz Proof British Gold Queen’s Beast Dragon Coin is shipped to you encapsulated for protection and set inside of a beautiful wooden display box. The box is ideal for the display of your coin and comes with a Certificate of Authenticity.

On the obverse of all 2018 1 oz Proof British Gold Queen’s Beast Dragon Coins is the effigy of Queen Elizabeth II. Her Majesty features here in a right-profile portrait created in 2015 by Jody Clark. A Royal Mint engraver, Clark is the youngest artist to create the monarch’s portrait for British coinage having completed the design at 33 years old.

The reverse of the 2018 Proof British Gold Queen’s Beast Dragon Coins bears the design of the Red Dragon of Wales. In this depiction, the dragon stands tall over a quartered shield with leopards in each of the quadrants. This royal arms belonged to Llewelyn ap Griffith, the last native prince of Wales.

Queen Elizabeth II named the Red Dragon of Wales the official emblem of Wales in 1959, clearing the way for this heraldic beast to feature on the national flag of Wales. The Red Dragon originated in the royal arms through Owen Tudor, a man who claimed Welsh heritage and was the father of King Henry VII.