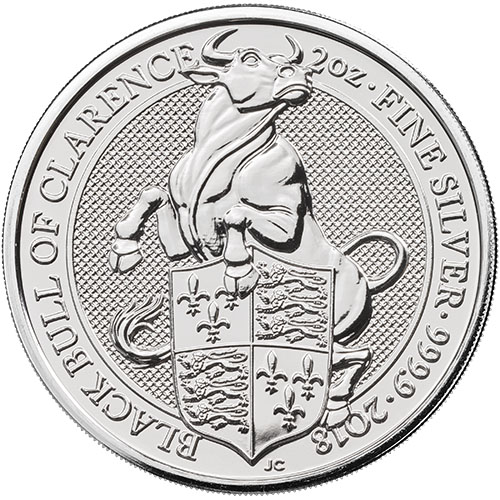 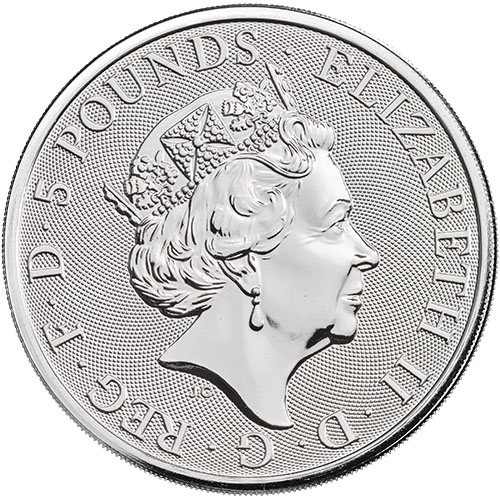 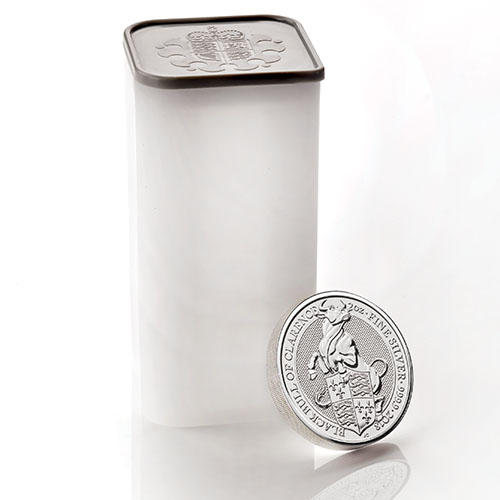 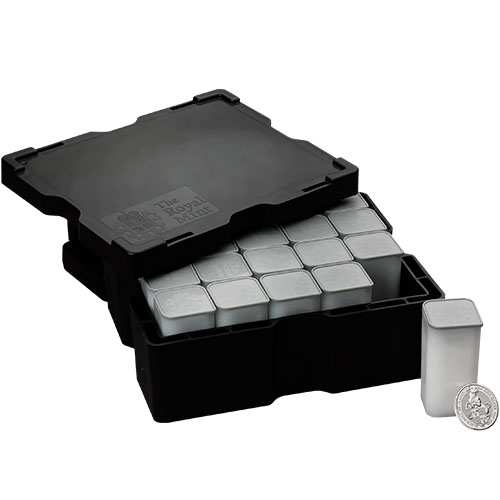 Any quantity available for $41.49 per oz over spot!
Add to WishlistLog In to add this product to your Wishlist
Free Shipping on $199+ Orders

The Queen’s Beast Series from the Royal Mint is a 10-coin series with fantastical designs of the heraldic creatures that signify the long history of the Crown of England. Various kings and queens over the centuries brought these beasts into the royal arms, and when the young Queen Elizabeth II was crowned in 1953, all 10 stood guard at Westminster Abbey. Right now, 2018 2 oz British Silver Queen’s Beast Black Bull Coins are available to purchase online from JM Bullion.

Each 2018 2 oz British Silver Queen’s Beast Black Bull Coin listed here today is in BU condition. Coins in BU condition exhibit no indications of wear and tear, though it is possible for minor flaws to exist. Commonly the result of the coining process, these flaws range from breaks in the luster and spotted surfaces to contact marks.

The Black Bull of Clarence is the fifth design to appear in the bullion range of the Queen’s Beast Coins. Each of the 10 heraldic beasts included in this series was brought into the lineage of the British crown by different rulers over the course of centuries, ranging from the Yorkist monarchs to the modern-day Tudors.

The appearance of the Black Bull of Clarence in the series is significant in that it represents the first imagery from the so-called Yorkist monarch. King Edward IV was the first British monarch from the House of York, and was a key player in Britain’s War of the Roses. The Bull was used by both Edward IV and his brother, Richard III who was the last York king.

On the reverse of the 2018 2 oz British Silver Queen’s Beast Black Bull Coin is the design known as the Black Bull of Clarence. It features a large, powerful bull behind a shield that features design elements of British and French relation. Two of the quadrants have the three golden lions of England adopted by Richard I, while the other two quadrants feature the golden lilies of France which Edward III added to the shield to support a claim to the French throne.

The obverse of all British Silver Queen’s Beast Black Bull Coins features Queen Elizabeth II’s effigy. This right-profile portrait is the fifth-generation effigy of Her Majesty and was created in 2015 by Royal Mint Engraver Jody Clark.

If you have any questions about these silver coins, please contact JM Bullion. Our customer service team is available at 800-276-6508, online using our live chat, and via our email address.

Rosanne from IL - May 18, 2018
"Very pleased with JMBullion and this QB Bull. I just started collecting the series and JMBullion offered reasonable prices. Plan to buy more from JMBullion. FYI, be sure to get capsule for these QB coins because they scratch easily."

Stephen from PA - April 23, 2018
"Really exited to get my order within a week! Black Bull, I feel is my favorite. Secure packaging, thank you, for extraordinary service on all my orders.Steve"

Christopher from IL - March 16, 2018
"JM Bullion delivered perfect coins. Can't beat the Queens Beast Series, it is a sure winner!!! I said it many times JM Bullion the best PM dealer out there."