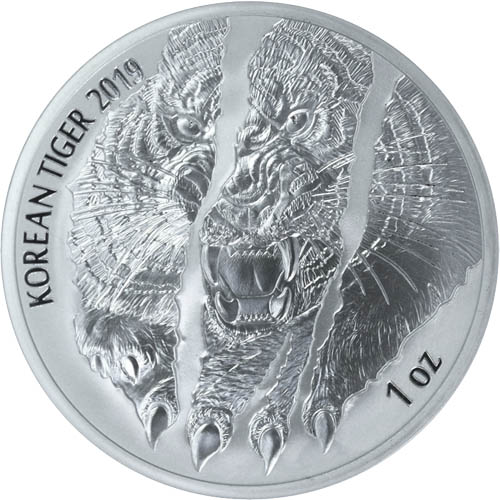 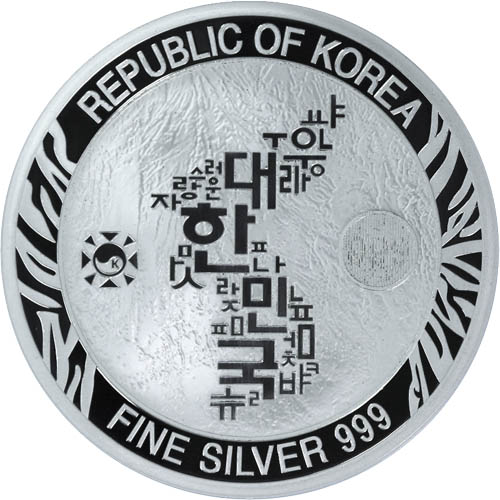 The tiger is one of the most symbolic animals in the culture of the Korean people. Tigers have served varying purposes in art, literature, and popular culture, even serving as the official mascot when South Korea hosted the Olympic Games. The South Korean Silver Tiger Medal collection launched in 2018 following the 2016 introduction of the gold bullion version. Now, 2019 1 oz South Korean Silver Tiger Medals are available to you for purchase online from JM Bullion.

KOMSCO introduced two major bullion programs in 2016. The most prominent so far has been the Chiwoo Cheonwang collection, but the Korean Tiger release has proven equally popular and does so with lower mintage figures. The series debuted in gold bullion, and in 2018 it gained two different silver options.

On the obverse of the 2019 1 oz South Korean Silver Tiger Medal is the image of the massive predatory cat’s claw slicing through the visual field. As the large claws of the cat cut through the design field, you can see the snarling look on the face of the large beast. Korean tigers are though to have last existed on the peninsula in 1922. The Korean tiger is a local reference to the Siberian tiger, the largest member of the species alive today by weight.

The reverse face of 2019 1 oz Silver Tiger Medals includes a common image used throughout this stunning collection. Here, you’ll find the Korean peninsula depicted without political borders or topographical features. This artistic rendition of the peninsula uses the letters of the Korean alphabet to fill in the form and shape.

KOMSCO is the official minting operation of the Republic of Korea. Created in the midst of the Korean War in 1951, it was founded to provide South Korea with independent coin production and paper currency printing.

We encourage JM Bullion customers to contact us with questions about these silver medals. You can call us on the phone at 800-276-6508, chat with us live online, or send us an email with your inquiries.

Tim from CO - November 10, 2019
"This Tiger Medal has a very striking design and there are a few anti counterfeit features such as a holographic ag symbol and a distinctive reflection on the map side! A very beautiful medal! don't forget to buy a 40mm capsule!"

Christopher from - September 21, 2019
"The 2019 South Korean Tiger Silver Medal is very fierce with the tiger finishing a swipe! This coin looks great next to 2018 version. I look forward to see how the series progresses."